Virginia once was covered by a shallow tropical sea as evidenced by the fossil record. Modeled after species once found here, our tropical reef exhibit is a recreation of coral and fish species that once thrived in a warm, sun-drenched sea. Colorful damsels and tangs swim just out of reach of clownfish jealously guarding their home turf, nestled among the stinging tentacles of their very own anemone hosts. The industrious engineer gobies excavate tunnels and burrows beneath the rocks covered with a variety of soft and hard coral species such as green hairy mushrooms, xenia, and colt corals. Ocean surgeonfish Acanthurus bahianus – is a common subtropical fish found among wrecks and coral reefs in the Atlantic Ocean. They are named “surgeonfish” after the razor sharp bone spurs or “scalpels” on both sides of the base of the tail. chromis Chromis viridis – This is a gregarious and peaceful omnivore commonly seen over reefs in large shoals throughout the tropical Atlantic. Bubbletip anemone Entamacea quadricolor – This large anemone is actually highly
mobile and may even split into multiple animals overnight. Clown tang Acanthurus lineatus – The clown tang, or lined surgeonfish is a popular and beautiful aquarium species, but can be difficult to keep. Like most tangs, they are largely herbivorous and graze on algae, but will also nip and pick on smaller fishes and corals. Engineer goby Philodichthys leucotaenia – This species, also referred to as a convict goby is not really a goby at all, but so named for the resemblance of their head and mouth to true gobies. The term “convict” refers to their vertical banding and the more appropriate “engineer” nickname refers to their habit of excavating extensive burrows in the substrate. Hand waving coral Xenia sp. – There are many species of Xenia but all use their hands or fingers to pulse and grasp small zooplankton and food particles to augment the nutrition they derive from symbiotic zooxanthellae. Mushroom Leather coral Sarcophyton sp. – There are many similar species in this Genus that can only be identified by differences in their polyp stalk and caps. The common name refers to its shape; often called a toadstool or trough coral as well. 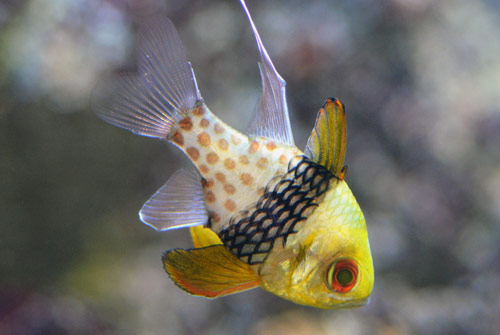 Pajama cardinal Sphaeramia nematoptera – Pajama or spotted cardinals are shy reclusive members of a reef community and will remain in almost a vertical position in the water column, swimming very little for long periods of time. Yellow tang Zebrasoma flavascens – The yellow tang is a common tropical herbivore that uses its tubular mouth and rasping teeth the scrape algae off rocks and coral. Though generally not aggressive, tangs will be territorial against each other and are best kept singly.