The Mountain Cove and Mountain Stream habitarium is a two-story living replica of Virginia’s upland habitats, complete with live birds, trees, many species of fishes, reptiles and amphibians. A two-story waterfall cascades into a pool filled with large brown trout and flows through a cross section of a babbling brook filled with over 20 species of native darters and dace. Amidst the cobbles and stones, these living jewels dance and dart about in the current in a pristine stream habitat. Further downstream, rainbow and brook trout – our state fish – display the magnificent coloration of one of the most beautiful fishes in North America. Tangerine darter Percina aurantiaca – Tangerine darters are named for the extraordinary coloration of the breeding males. They are also exceptionally large for a darter and are even caught on hook and line occasionally; referred to by fishermen as “river slicks”. Gilt darter Percina evides – Another beautiful darter species, gilts are native to the western portion of Virginia, in rivers that flow into the Tennessee drainage. Their coloration and banding can vary widely and may differ by the river system or location in which they inhabit. Redline darter Etheostoma rufilineatum – Redlines are named for their obvious red dashes along their sides. As with most darters, the male is brilliantly colored while the female is smaller and more muted. This darter is particularly secretive and often found in the swiftest portions of cold streams and shallow rivers. 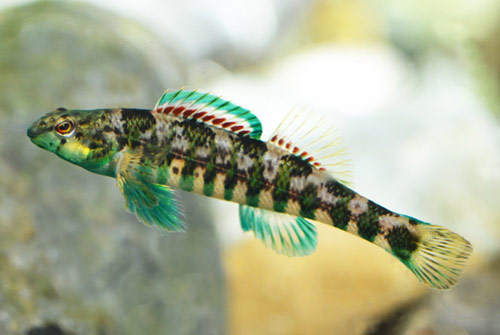 Banded darter Etheostoma zonale – Banded darters are one of the smaller darter species in Virginia, reaching only about two and a half inches. Snubnose darter Etheostoma simoterum – Snubnose darters are named for their unusually blunt snout. This darter is relatively common in the Tennessee drainage and may have many subpopulations throughout their range. Mountain redbelly dace Phoxinus oreas – Named for the red belly of the breeding males, this species is relatively common often forming large shoals or “schools” in the pools of clear Virginia streams. Warpaint shiner Luxilus coccogenis – This species is named for the markings on their faces, said to resemble stereotypical Native American war markings. This species is an important host for the larval stage of the freshwater mussel, but both populations have been in decline due to habitat loss and alteration. Brook trout Salvelinus fontinalus – The Brook trout is Virginia’s state fish and the only native trout species. Wild brookies are most common in cold upland streams, where they grow slowly and do not reach nearly the size of either rainbows or browns, rarely exceeding one pound. Brown trout Salmo trutta – Brown trout were introduced to Virginia from Europe in the late 19th century as a sport fish. They are known for their voracious feeding habits but are also known ironically for their guile and elusiveness. Rainbow trout Oncorhynchus mykiss – Perhaps the most common trout species worldwide, rainbows have been introduced widely throughout the states as a sport fish from the West, but are also widely cultured as a food fish due to their rapid growth and mild flavor.