2012: A Year of Astronomical Proportions

Happy New Year everyone!  Once again, I shall ride the current bandwagon, and this post will feature a list of things coming in 2012 that, if at all possible, you should not miss.  Mark these five dates on your calendar now!

March 3, 2012: The Opposition of Mars
No, this has nothing to do with us declaring war on the Martians.  A planetary opposition occurs when a planet is seen exactly opposite the Sun from the Earth, meaning that the planet will rise at sunset and set at sunrise, remaining visible in the sky all night long.  This also means the planet is generally closer to the Earth, as it is on the same side of the solar system as we are.  For Mars, this is a wonderful thing.  Mars has a highly elliptical orbit, and that means that opposition brings our little red neighbor (Mars is only half the diameter of Earth) close enough that details can be seen on the surface with a good telescope.  With a really big telescope…well…you can just imagine. 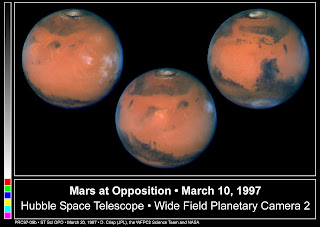 This year’s opposition is a poor one – even at close approach, Mars will not be as close as it has been in years past – and future oppositions will be better than this one too.  But it’s worth seeing the planet nonetheless, even if you don’t have a telescope.  Mars is usually a dull orange-ish star in our sky, and not very noteworthy.  But during opposition, Mars will rival Sirius, the brightest star in the nighttime sky, in brightness – a stirring sight for sure.  Right now, Mars rises late in the evening and is visible high in the south around sunrise.  As the year progress, watch for it to rise earlier and earlier in the evening, making viewing this beautiful planet a pretty simple feat even for those who don’t like staying up late.  Want to see Mars through a telescope?  Come visit us for our monthly Star Party & Laser Light Night on March 10th.  Mars will be a week past opposition, but still looking great!  Don’t miss it!

May 20, 2012: An Annular Solar Eclipse
This one is especially for any readers I might have in California, Utah, Nevada, Arizona, New Mexico and Texas.  On May 20th, as the Sun is setting across those states, the Moon will glide in front of the Sun.  But the Moon will be too far away to cover the entire disk of the Sun, resulting in what is called an annular solar eclipse.  Most of the Sun’s disk will be covered, with only a ring of solar surface visible around the Moon.

IMPORTANT NOTE: Do NOT attempt to view the eclipse without proper eye protection!  Doing so can result in serious damage to your eyes, even blindness.  The Sun’s surface, even only a small portion of it, is incredibly bright.  Never look at the Sun with unprotected eyes.  GOOD NEWS: You don’t need a telescope to view this amazing event!  The best thing to get is a pair of eclipse glasses – they’ll likely be available at your .local science center as the eclipses gets closer, or you can order them online.  Or, for a quick, inexpensive solution – buy a piece of Shade #14 Arc Welder’s Glass from a local hardware store, and look at the Sun through that.  Make sure you get Shade #14 – no other shade will work.  Once you’ve protected your eyes – go outside about an hour before sunset (check your local paper for exact times for your area!) and watch the Sun as it goes down.  It will be an amazing view.

June 5, 2012: The Transit of Venus
Okay folks, this is the big one.  If you see no other astronomical event this year – see this one.  Why?  Because, quite literally, you will not have another chance to do so in your lifetime.  There will not be another transit of Venus for 105 years – so this is your one and only chance.

A transit is kind of the opposite of opposition – in this case, a planet is crossing in front of the disk of the Sun as seen from the Earth.  Naturally, we can only see transits of Mercury and Venus – the only two planets which lie closer to the Sun than we are.  You’d think these would happen all the time, but like eclipses, the geometry doesn’t always work out.  Most times a planet passes above or below the Sun from our perspective.  But every so often the geometry is perfect, and we get to see a planet silhouetted against the brilliant face of the Sun.

The transit of Venus this June will occur close to sunset for us, and you can bet we’ll be watching here at the Virginia Living Museum!  Stay tuned for more information on our Transit of Venus event.  While the transit will be visible unmagnified with suitable eye protection (remember the warning above!), it will be better through a telescope.  If you’re local to Hampton Roads, plan to come join us!

December 13, 2012: The Geminid Meteor Shower
Meteor showers are always fun, and there are usually a couple good ones each year.  But if you’re only going to bundle up and sit outside for several hours once in 2012, wait until the December Geminids.  The Moon will be new, making this a perfect night for stargazing in general.  The shower will peak around 7pm local time, meaning you don’t have to go outside in the middle of the night to enjoy a good view.  Simply find a dark location (the fewer lights the better!), set up a comfortable lawn chair (laying back so you can see a lot of the sky without straining your neck is best), pile on some blankets and enjoy the show.  The meteors will seem to come from the constellation Gemini the Twins, so if you can place those stars at your back, so much the better.  You can watch until the wee hours of the morning if you like…2am is often a good time to see meteors as our part of the Earth will be turning into our direction of motion, making for good meteors!

December 21, 2012: The End of the World
Okay, this one really isn’t an astronomical event.  In fact, it’s not really an event at all.  Well, it is the Winter Solstice, but you can’t really “watch” that event unless you plan on setting up a camera and waiting a year.

But you’re probably aware of the numerous predictions of doom and gloom for our planet surrounding this date.  I always love it when such things come up, because it gives us a great opportunity to educate folks about science and how it works…and how it doesn’t.  Want a primer on what all the fuss is about?  Join us for 2012: The End of the World? NOT!, a brand-new planetarium show which will be featured all year at the Abbitt Planetarium.  And stay tuned for more information about our End of the World Party, currently in the planning stages.

So there it is – what not to miss in 2012.  May it be a year of astronomical proportions for all of us!
Carpe noctem!
Kelly