Chain Pickerel Esox niger, are a species of fresh water fish most commonly found in rivers and streams. They are named for the chain-like markings along their sides. Pickerel have long, thin bodies and broad, rounded, beak-like rostrums, with a distinctive vertical bar beneath the eye. Their mouths are full of sharp teeth and they can eat anything that is half their size (even mice!). Pickerel usually grow to about two to three feet in length. Pickerel, which are part of the pike family, are difficult to net because they reside in shallow water and move very quickly, making it an exciting catch if one is ever obtained. Luckily, Chris Crippen and myself, Sarah Peake, were able to snag one a few months ago in the Little Creek Reservoir.
We were both looking forward to seining a juvenile pickerel. I got really excited when we spotted one about 8 inches in length sitting in the water we were about to collect from. Unfortunately, we quickly found out that the pickerel were not only faster than we could pull the seine net, but were smart, and avoided the net with ease. To our disadvantage, pickerel often hang out in weedy habitats, making it even harder to pull the seine quickly enough to net one. At the end of the day (and after much frustration of pulling the net over and over again and catching a lot of weeds), we were feeling rather disappointed. Chris decided to try one more spot a few yards down. I pulled the seine out and moved along the bank of the water as quickly as I could.  Before I could even get back on shore Chris saw that I had netted one, so we moved quickly to grab it and put it in our bucket. We were both so excited to finally have gotten one, and a good sized one it was (about 6-7 inches in length). Following tradition, I named her Sarah, after myself (she who catches the prize gets to name it after themselves). 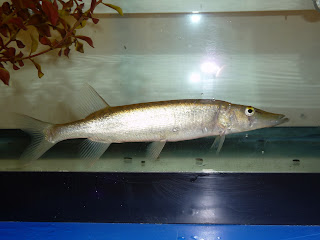 Sarah, with a full belly of golden shiners.

So far Sarah has grown to about 8 inches in length. She is eating live food, mostly rosie red goldfish, and has become a favorite among the aquarists to feed. As many of us say, she “annihilates” her prey quickly, to say the least.
We still keep her in quarantine, since it can be tricky to acclimate a pickerel onto exhibit for a few reasons. For one, pickerel tend to stay sedimentary, and because of this they can be easy targets for other larger fish and/or turtles on exhibit. Another concern is that they mostly eat live food. Though it is possible to get them to eat frozen fish, it can be difficult. If she is the only one on that particular exhibit that eats live food, and she is not moving around like the other fish, she may not get to the food in time, and will have lost her meal to the other fish. 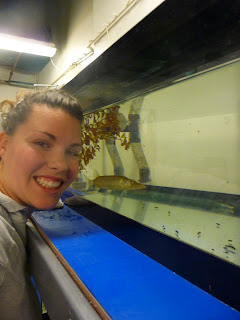 Sarah needs to get a little larger before we put her in our Woodland Pond exhibit. Once we feel she is big enough we will move her into the exhibit where she will live until she gets too big (she’ll then move into the Cypress Swamp exhibit). So for now, Sarah remains behind the scenes in quarantine, and will be on exhibit soon enough.