By Virginia Fishes In Virginia Fishes
The VLM has many species of invertebrates and almost every common crab species found in VA and a few that aren’t. Of course we display the iconic blue crab Callinectes sapidus, but also several hermit crab species, mud crabs, ghost crabs, two spider crab species, and the ancient horseshoe crab Limulus polyphemus who are more closely related to scorpions and spiders than true crabs. In addition to these relatively common species we have some more unusual species – the beautiful calico box crab, stone crab, portunid crab, and the giant red hermit crab – that are more common further south than Virginia. We also display the Atlantic lobster and the miniature freshwater counterpart the crayfish (in an unusual blue phase and red phase, pictured below) 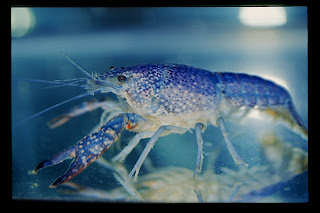 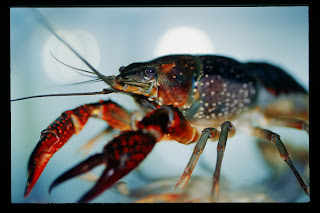 We collect these animals (sometimes on accident) most often as juveniles and have them for several years. As they grow, they must shed their shells or exoskeleton and form a new shell; these discarded shells are called molts. Molting can be a very dangerous time for these animals. Their shells are ordinarily a hard protective armor against predators, but immediately after molting their shells are soft, leaving them vulnerable to predation even by humans; soft shell (blue) crabs are considered a delicacy by many people. The process may take many hours and they may not harden up for days. Female blue crabs mate at this stage and are “covered” by the males. A previous blog shows the entire process of a calico box crab molting. Not only are the animals vulnerable, but many things can go wrong during the process and result in deformities, loss of limbs, even death.
In captivity, proper nutrition and excellent water quality are critical for the proper shell development; pH, ammonia levels, and trace elements in sea water (mg, Ca, P) seem to all factor in to molting success. Poor nutrition or water quality may result in malformed shells, shell necrosis (pitting) or death. We vary their diets as much as possible to ensure complete nutrition. Diets include: live clams, shrimp, squid, herring, mackerel, capelin, Mazuri gel diet and Ulva (a green algae). Species such as the blue crab will molt many times in their lives, growing up to 30% each time! Eventually they reach a terminal molt, a size at which they will grow no larger.
The aquarium staff keeps and carefully dries out the fragile molts for educational use, or even as decoration. Below is a picture of our latest lobster molt ( the yellow ruler is 6 inches) and various molts that adorn my office: 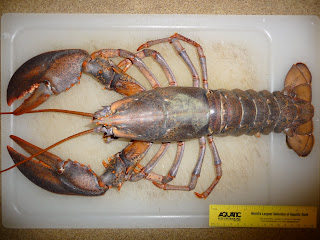 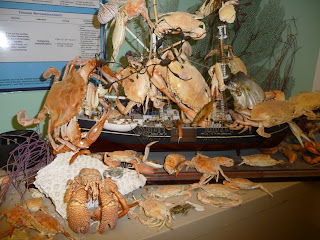