Lying motionless in wait for prey in our World of Darkness gallery is a reptile so fearsome that her name alone frightens people: The Northern Copperhead (Agkistrodon contortrix). Everyone is well aware that copperheads are venomous and it is the fear of this species that drives many peoples’ dislike for snakes. But is the Northern Copperhead really as bad or as fearsome as everyone believes? 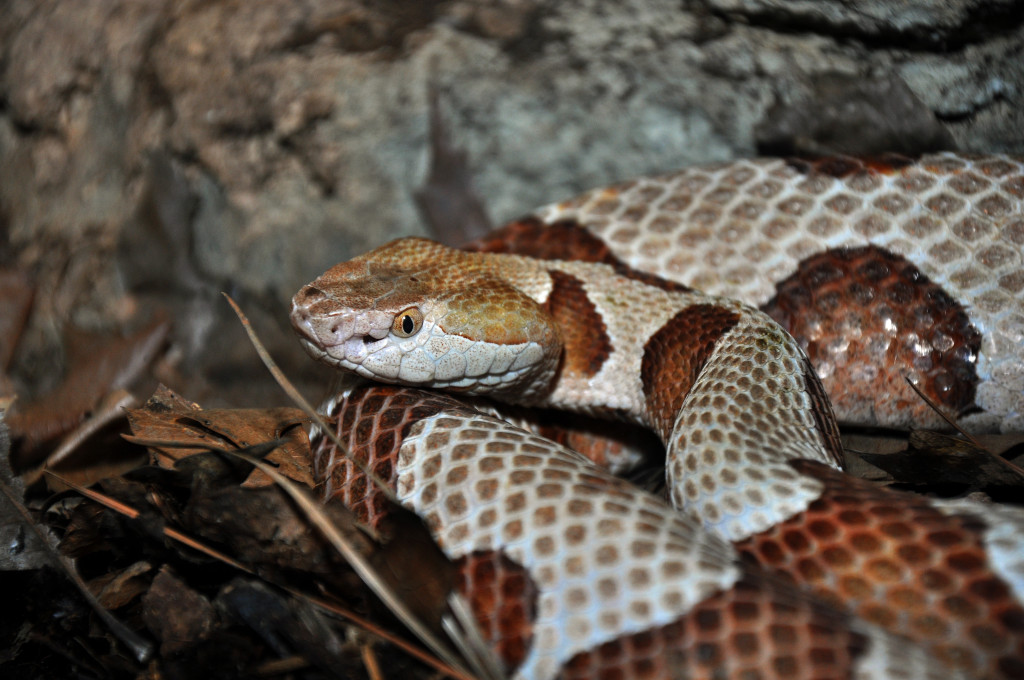 A very broad, stout snake, the copperhead is not as sleek as her nonvenomous counterparts. Copperheads are much less active than other snakes; rather than hunting down food, they sit motionless for days on end, waiting for prey to come just within reach. Young copperheads even have a bright yellow tail that they use as a lure to catch prey. Their tan and brown patterning allows them to blend in with the leaves, nearly invisible to predators and prey alike. Part of the pit viper family, copperheads have two small heat pits just between their eyes and nostrils, and these heat pits allow the snake to see prey’s body heat, much like thermal imaging.

Northern Copperheads are just one of three venomous snakes in VA (we’ll talk more about the Cottonmouth and Rattlesnake in the future), and their name is feared far and wide. Despite being venomous, copperheads actually pose very little risk to humans. Firstly, their venom is not as potent as many other venomous snakes; when bitten, our immune system is generally able to protect us from the venom. There are no recorded deaths from a copperhead in Virginia despite many urban legends. Copperheads are also very solitary animals, and generally avoid human activity whenever they can. Most meetings are accidental, and even when confronted by humans, copperheads are not quick to bite. Venom requires a lot of energy for the snake to produce, and since they need that venom to immobilize prey, it is disadvantageous for the snake to use the venom to defend itself, and will generally only be done as a last resort. Most copperhead bites occur when people attempt to capture or kill them (if you approach ANY wild animal, you run a similar risk of being bitten); copperheads are non-aggressive snakes that only bite in defense.

Copperheads may not be everyone’s idea of a good neighbor but they are beneficial animals if left alone. They feed primarily on rodents such as mice and rats, and generally when they are found nearby our homes, it is simply because they are hunting the rodents that live close to us. A single snake can do wonders for a mouse infestation, without having to put down traps or poison. Despite their beneficial nature, many people do not feel comfortable with a venomous snake around their home due to children or pets. If a copperhead (or any venomous snake) is found in your yard, it is recommended that you call wildlife services to take care of the animal, thereby keeping you and the snake safe.

The Northern Copperhead has relatively weak venom as far as venomous snakes are concerned. So why is everyone convinced they are so deadly and aggressive? Well, Australia also has a species of snake called a Copperhead, though this species is part of the cobra family, not a pit viper. The Australian Copperhead has more potent venom that is capable of killing a healthy adult, and it is simply a misunderstanding that has led people to assume that our native copperhead is just as deadly.