Let My Armies Be the Rocks and the Trees and the…Reptiles of the Sky?

A long title, isn’t it?  And those who enjoy the Indiana Jones movies know what it’s based on.  Although apparently, Charlemagne never said anything of the kind.

Reptiles of the sky?  Really?  You betcha.

Reptiles are much on our minds these days at the Virginia Living Museum, as this coming weekend is Reptile Weekend at the museum.  If you’re in the area, and ever been fascinated or frightened by reptiles, I suggest you come check it out.  Those who love reptiles will find amazing and wonderful species to delight you…and those who are not such big fans might just learn a little, and discover that reptiles are a vital part of the Earth’s ecosystem.

But what does any of that have to do with the sky?  Lots!

The night sky is filled with images seen by people who lived thousands of years ago.  We call these images constellations.  Many, but not all, come from the ancient Greeks.  Today there are 88 officially recognized constellations, and among them, you can find 5 reptiles in the sky.  I thought you might interested in meeting them.

Of the five reptiles in the sky, three are snakes…probably the reptile which elicits the strongest response from people.  Snakes are fascinating creatures. Their most important job is keeping us all from living hip deep in rodents, and for that, I thank them (I confess I’ll take a snake over a mouse ANY day – especially in my house).  So let’s check out the snake constellations first.

Serpens the Serpent is kind of intertwined with another constellation – the now-infamous zodiac intruder Ophiuchus the Serpent-Handler.  While the Sun doesn’t linger for many days in this constellation near the ecliptic, it does so in the winter, meaning that the best time to see Ophiuchus and Serpens is in the summer.  Look to the south around 9pm during the summer months and see if you can spot a kind of coffin shape.  That’s Ophiuchus.  The serpent is wound around him, and extends out as a trail of faint stars to either side of the coffin.  I don’t know what kind of snake Serpens is supposed to be, but he’s big…maybe he’s a Reticulated Python? 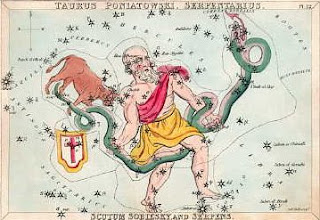 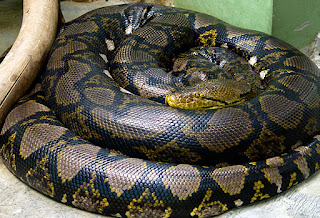 Two more snakes can be found in the sky – but you’ll only see one of them in Virginia.  Hydra and Hydrus – the Female and Male Watersnakes are widely separated on the sky, and Hydrus can only be seen in the southern hemisphere.  Any readers in Australia – can you find Hydrus in your sky?  It’s a fairly small and dim constellation, so it could be quite a challenge.  For local readers, look for Hydra stretching across the southern skies of spring – she’ll be visible nicely by 9pm in late March.  Look to the left of Sirius, the brightest star in the nighttime sky, for a small kite-shape.  This is Hydra’s head.  Her body is, like Serpens, a long winding trail of stars extending off the kite-shaped head to the left (the image below is left-right reversed, as most constellation images were made in the 18th century – this was God’s point of view).  You could even see Hydra at this time of year, if you are out late enough – she’ll be in the southern sky tonight by midnight.  There are numerous snakes that you can find swimming about in Virginia…perhaps Hydra is the Brown Water Snake.  As to Hydrus, I’m not sure…maybe the Olive Sea Snake? 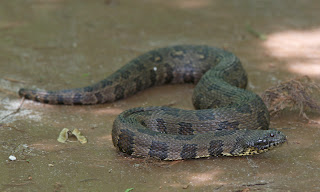 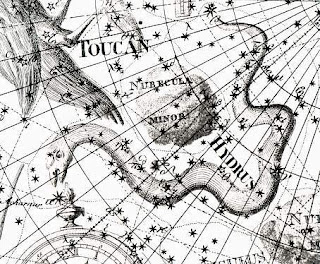 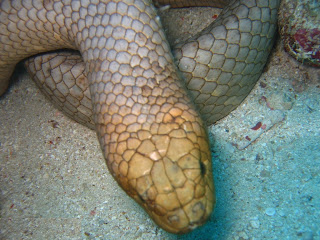 Another reptile in our sky is Lacerta, the Lizard.  Lacerta is almost circumpolar, meaning that it can be seen in our sky on almost every night of the year.  The best time to look for it is, however, in the fall.  The lizard is little more than a tiny, faint squiggle of stars between Cygnus the Swan and Andromeda the Princess.  Since it is so tiny, perhaps this lizard is a Five-Lined Skink...my husband’s personal favorite lizard.  Why?  Because they like to live in the garage and yard and eat the bugs! 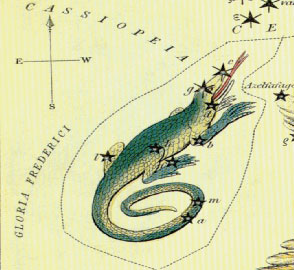 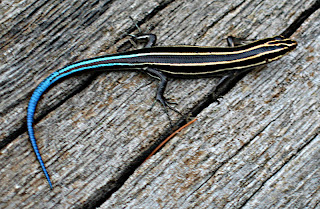 Above: The constellation Lacerta by Hevelius.
Below: A juvenile five-lined skink.  Courtesy Wikipedia.

Finally, our last reptile can only been seen from the southern hemisphere again…it is the beautiful Chamaeleon the Chameleon.  If ever you get the chance to travel below the equator, be sure to spend some time checking out the sky – the differences are amazing!  Sadly, not only can we not see the constellation, there are no species of chameleon native to North America (although sometimes people mistakenly call a green anole a chameleon).  So if you want to see one of these amazing creatures in the wild, your best bet is Africa! 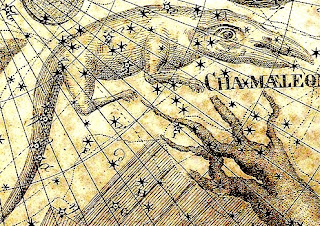 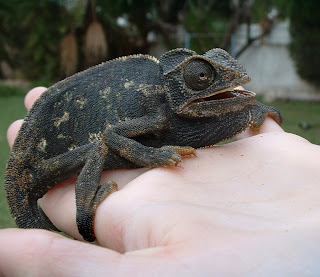 Above: The constellation Chamaeleon by Bode.
Below: A chameleon.  Courtesy Wikipedia.

Or…come to the Virginia Living Museum this weekend!  We’ll be featuring a fun game-show style planetarium show “A Sky Full of Scales” where you’ll get to see both the constellation and a video of a real chameleon!  Plus you might win a prize!  And you’ll get to see some amazing reptiles up close and personal.  Don’t miss out on the fun!

Until next time…
Carpe noctem!
Kelly

Cancel Reply
Cosmic Strings > Let My Armies Be the Rocks and the Trees and the…Reptiles of the Sky?