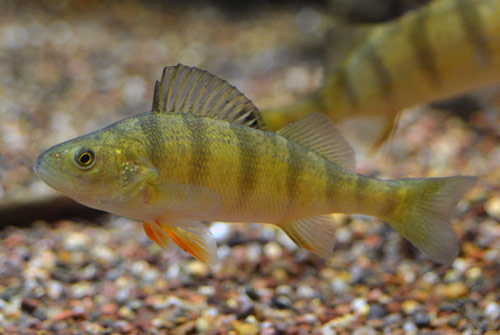 The Cypress Swamp is a recreation of vital and endangered wetland habitat. This two-story glassed-in exhibit features an entire community of fishes in a 25,000 gallon aquatic portion and a terrestrial portion that houses swamp animals amongst massive cypress and tupelo trees from red-headed woodpecker to American alligator. Swamps are extremely diverse habitats and very biologically productive. The vegetation serves as natural water filters absorbing nutrients and trapping fine sediments that otherwise would flow unimpeded downstream. But because swamps are naturally stagnant and filled with organic material, they are often low in oxygen as well, fishes therefore must be able to withstand adverse conditions and some have changed little over time, giving scientists a view into the past when much of North America was Primordial swamp. The bowfin and gar are two such examples of fishes that have been around over 100 million years.

Bowfin Amia calva – Bowfin are an ancient species well suited to swamp life. They can withstand very high water temperatures and very low oxygen by gulping surface air. Although they are largely disregarded by fishermen as table fare, bowfin are tenacious and powerful fish.

Longnose gar Lepisosteus osseus – Gars have existed for more than 200 million years and look like it; they are heavily armored with thick interlocking scales, and they possess formidable teeth. Those teeth come in handy as gar lie motionless snapping their long toothy jaws on unsuspecting prey, from which prey rarely escapes.

Channel catfish Ictalurus punctatus – Catfish are an iconic group of fishes. They inhabit nearly every aquatic habitat across the world; a testament to their adaptability and biological success. Virginia has several catfishes but the channel is likely most popular; they are good to eat, large enough to catch for sport and found statewide.

Common carp Cyprinus carpio – Carp are beloved in their most elegant form – koi – but unfairly maligned as a “common” in their natural state. However, carp are intelligent as fishes go, and can be very long-lived, reportedly surviving over 50 years in captivity. Carp are rightly categorized as bottom feeders, but their diet is mainly herbivorous.

Largemouth bass Micropterus salmoides – The largemouth bass is the undisputed king of freshwater game fish. Although largemouths are now in every one of the lower 48 states, the largemouth bass was originally native to the Mississippi Basin and the Atlantic slope drainages of the Southeast from Florida to North Carolina, just below the Virginia state line. Their current distribution is indicative of their popularity – there are an estimated 30 million bass fishermen in the United States alone, constituting a $30 billion industry – but also to their adaptability. Largemouth bass can thrive in a wide range of environmental conditions and inhabit every major drainage system throughout Virginia, from the brackish waters of Back Bay to the Appalachian uplands, including the Eastern Shore.

Bullhead catfish Ameiurus spp. – Bullheads do not get very large but are common enough to make them familiar with most bait fisherman. Juveniles form large pods and move in kinetic ball through the shallows, vacuuming up any edible material in their path. Yellow perch Perca flavescens – The yellow perch is member of a large and diverse family of fishes that includes over 40 Virginia species from small benthic darters, to nocturnal and elusive walleye and sauger. Highly coveted as a food fish, yellow perch have a short but intense local commercial fishery during their early spring spawning runs as they migrate from brackish water far into freshwater off of many Chesapeake Bay tributaries.

Flier Centrarchus macropterus – The flier is a little known sunfish, because they are neither abundant enough nor large enough to be sought after specifically. Fliers are much more commonly found in swamps than any of the other sunfishes.