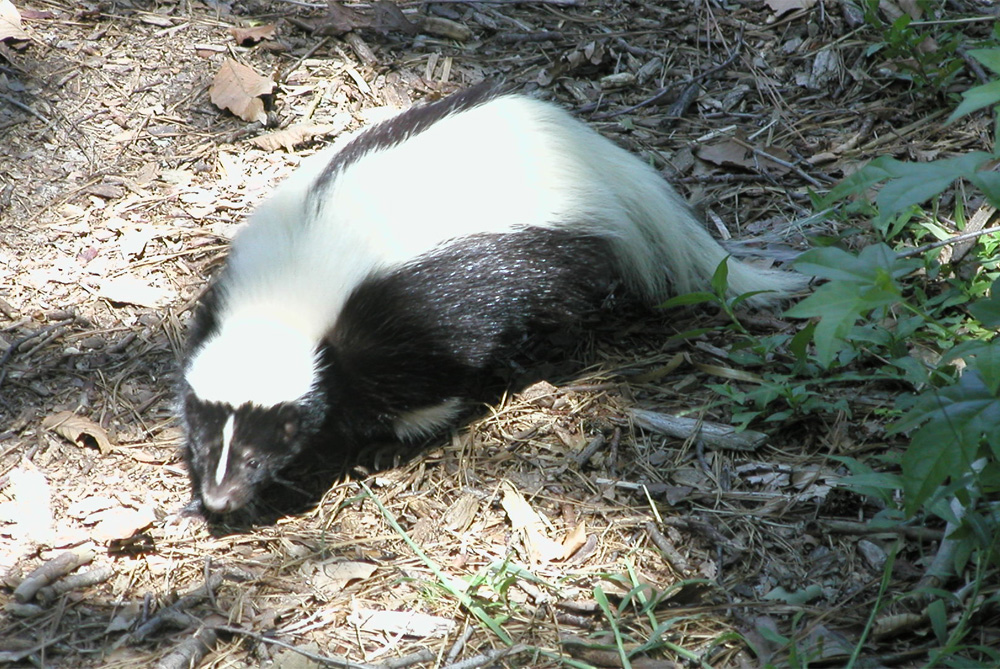 Skunks are found throughout the United States. Their name comes from the Algonquian Indian word seganku, which means polecat. This mammal has a small head, ears, eyes and a pointed nose. It has short legs, black fur and a wide rear end. It walks on all fours like a bear and has long, sharp claws for digging. There are two types of skunks in Virginia, but the most well-known is the striped skunk. The smaller spotted skunk is found in the mountains.

The striped skunk is known for the signature white strip that stretches from its forehead to its tail. Beginning as one strip, this streak forks off as it reaches the back. It stands out among the black fur and acts as warning sign for predators. Though most animals would rather camouflage themselves from their hunters, the skunk has a secret weapon that allows it to boldly expose and defend itself. Skunks can emit a strong, vile spray from their anal glands. This spray not only leaves a lasting smell, but also causes its predator temporary blindness. Skunks have impressive aim and are able to spray in any direction, at any time, up to 15 feet. As generally sluggish animals with poor eyesight, smell and hearing, this defense mechanism is essential to their survival.

Skunks eat a variety of animals, insects and fruits, including ants, spiders, chipmunks and honeybees. They will use their claws to dig into a bee colony and eat the bees as they fly out. Their thick fur coat protects them from painful beestings. They also steal from garbage cans and bird nests. A skunk will consume massive amounts of food during the summer to build a heavy layer of fat to sustain itself over the winter. Though skunks do not hibernate, they often sleep for long periods of time during the winter and only leave their burrows or dens during warm spells.

Skunks mate during the cold months. Though they are not monogamous, many female and male skunks share a den. When spring arrives the dens are filled with four to eight young, or kits. The mothers stay with their young during the day to nurse them and hunt at night, while the father takes no role in the nurturing process. After a month and a half the kits emerge from the den and follow their mother in her nightly hunts. These hunts usually stay close to the burrow or den, but if food becomes scarce the skunks will relocate and build a home elsewhere.

Striped skunks face many predators that even their spray cannot always ward off, including foxes, dogs, coyotes and bobcats. One of its greatest threats is the great horned owl. This owl has a weak sense of smell and is unfazed by the skunk’s spray and therefore is able to capture and kill many skunks. Skunks are also highly susceptible to harsh diseases such as tularemia and distemper. Additionally they are often killed by car accidents or hunted for their fur.

4
Previous
Next
Connecting people to nature through educational experiences that promote conservation.