Last Thursday prior to our weekly SCUBA program, we added our two male lemon sharks to the 30,000 gallon Chesapeake Bay tank. 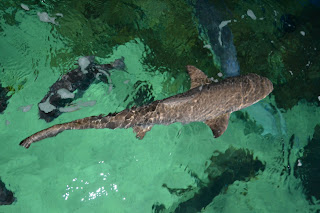 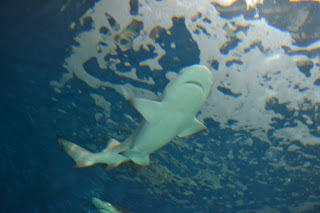 Before moving the sharks, we had to first remove the southern stingray from the exhibit, as skates and rays are natural prey for many shark species. Our presence inside the exhibit helps to disrupt any potential territorial behaviors by the fishes already in the tank and allows us to closely monitor the situation and even to remove the sharks if things go poorly. In holding, these two sharks were very active and rather aggressive; in fact they ate several smaller tankmates, so caution was needed. But so far so good. Inside CBA each shark has established one half the tank as their own “territory”, circling near the surface of the tank, always alert for food. They are still fed off tongs three times a week, but get several peices of food each when the fishes in the main tank are fed during the 2pm program. They showed no fear of us during the dive and swam directly in front of me whenever I was near the surface totally unafraid. Juveniles of top predators and animals that get to be very large often are fearless, perhaps instinctively knowing that one day they will be quite formidable.