Skate Exhibit up and running

A few months ago on a recreational trip to Oregon Inlet, North Carolina I noticed an unusually large amount of flotsam around the southern jetty. Always on the lookout for interesting exhibit props, I discovered wooden poles, formally from a pound net, that would make excellent pilings in the skate exhibit. Treated wood is toxic for fishes so wood pilings could not be purchased, and our budget would not allow for fabrication of pilings from textured cement.

So…two aquarium staff members went down ASAP and discovered the wooden poles still washed up and left on the beach. They then sawed the pole down to five, 5- foot sections and brought them back to the VLM. The new “pilings” were then drilled through the bottom to hold bolts and lightly scrubbed and set aside for the project of remodeling the Skate/Ray Exhibit. The stingray that was then on exhibit was removed to a holding system, and the renovation began!

The next step was to drain the exhibit. Then the substrate was removed. Outside of the tank, the five pilings were attached to a large piece of high-strength resin that served as a base to keep the pilings stationary and stable. After the piling structure was installed inside the exhibit, sand that had also been previously collected and washed was then added to cover the base, and the tank was filled. We let the tank run for a few days and plumbed in a chiller before placing the animals in the new habitat. Once the chiller was installed, the exhibit was ready and now home to three Little Skates (Raja erinacea) and five spotted hake (Urophycis regia)! 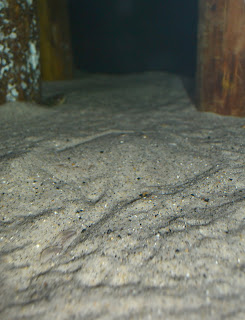 Notice the diamond – shaped outline of the skate in the center of the sand! 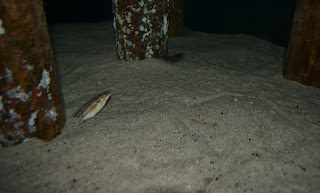 To the left, a hake is poking out of the sand. On the right, notice the skate’s outline in the sand.
Tags > little skates, spotted hake