Since its inception, the Virginia Living Museum has had more volunteers than staff members. Today, there are nearly five volunteers to every one staff member, and these dedicated individuals support every aspect of the Museum.

“Volunteers make the Museum go,” said Shandran Thornburgh, the Museum’s director of volunteer services. “We wouldn’t be able to open our doors without them.”

From designing the first exhibits to preparing food for today’s animals, hundreds of volunteers give thousands of hours each year to support the Museum.

And what do they get out of it? Countless rewards. Volunteers carry specimens to the Museum’s gallery to prepare for its 1966 grand opening.

Opening in 1966, the Junior Nature Museum and Planetarium was small on staff but big on volunteers.

Its original mission statement declared the Museum declared was “dedicated to teaching by doing”—and volunteers made this mission a reality. As a not-for-profit organization, the Museum lacked funds to support a robust paid staff, so its lean budget left much of the work to devoted volunteers.

These dedicated men and women assisted in operations and even designed and constructed the first exhibits. These early exhibits consisted of dioramas, stuffed animals and plant specimens organized by volunteers. Volunteers also led guided walks through the nature trails behind the original 5,500-square-foot building.

From its earliest years, the Museum’s staff saw the benefit of having volunteers.

“Volunteer time and effort is greatly needed and appreciated, for without them we could not have accomplished what we have to date, nor could we make any advancement in the future,” said Brad Hawkins, the Museum’s first executive director. Volunteers prepare stuffed birds for an early exhibit at the Peninsula Junior Nature Museum and Planetarium.

The Junior Nature Museum and Planetarium looked to its volunteers to create exciting attractions to draw in visitors. Between the planetarium offerings, exhibits and nature trails, the Museum welcomed more than 70,000 visitors its opening year.

As the Museum expanded, the need for volunteers grew as well. The Museum depended on these individuals to support exhibits and special events, from the first haunted house fundraisers to the rent-a-duck events in the 1970s.

Behind every exhibit, program and event was a group of willing volunteers dedicating time and energy to support the Museum. This was the core team that became the volunteer services department in 1987.

To support the $3.2 million renovation into the first living museum east of the Mississippi in 1987, Museum leadership knew they needed more volunteers than ever. A volunteer services department  was created to ramp up volunteer recruitment.

Brought on by Executive Director Bob Sullivan as the Museum’s first director of volunteer services, Gloria Lombardi was tasked with building a network of volunteers to support the new Museum.

“I was hired in January, and the expanded building opened in May,” Lombardi explained. “It was not quite five months, and I had to find and train volunteers.”

“I had heard from Bob [Sullivan] that we needed 100 volunteers, but once I spoke with the different department heads it was almost 200 volunteers,” said Lombardi.

By the Museum’s reopening, Lombardi and the volunteer services department had a roster of more than 150 active volunteers to staff the exhibits and support Museum operations. Lombardi continued to recruit individuals interesting in volunteering. Thelma “Tede” Johnson volunteered and hosted a story time at the Museum for 18 years. A dedicated volunteer, she passed away in 2014.

“Volunteering is such a good experience for people,” said Lombardi, who went on the serve as the Museum’s executive director. “It’s good for students in teaching and biology and helps retirees get back into doing what they enjoy.”

With a formalized department in place, volunteering became more structured.

“It’s definitely important to have a dedicated volunteer department because it helps the Museum better meet its mission,” explained Shandran Thornburgh, who joined the Museum in 2003 and continued Lombardi’s work.

“When Gloria Lombardi started the program all those years ago, she created a well-organized volunteer program,” Thornburgh said. This foundation established the department and helped it continued through the 1990s.

With volunteer services thriving at the Museum, the new department was ready for its biggest challenge yet: preparing for the grand opening of the Museum’s new building in 2004.

When Thornburgh was hired to lead volunteer services in 2003, she was tasked with a significant undertaking.  In 2002 the Virginia Living Museum had broken ground for a new 62,000-square-foot building to complement its new aviary and elevated boardwalk.

To prepare for life in the new building, volunteer services needed around 450 new volunteers to be fully staffed. The Museum only had 125 paid staff so volunteers’ help was greatly needed.

“I had to launch a full-on recruitment effort through every avenue possible,” Thornburgh said. “I went to every possible recruitment opportunity.”

With the new building came new opportunities for the volunteer services department to grow.

“We knew we had to grow the program and Gloria Lombardi had the foresight to write us into the budget,” Thornburgh explained. Serving as executive director, Lombardi also ensured that the new building’s blueprints called for a dedicated office space specifically for the volunteer services department.

Coming on in the midst of a massive transition, Thornburgh took the opportunity to restructure the department and bolster volunteer training opportunities.

“It was a little bit of a challenge in the beginning to set the tone,” she said. “I put a lot of things into place administratively. I have developed an entire volunteer services training manual.”

Based on the manual Thornburgh began in 2003, today new volunteers undergo onboarding and a general orientation in addition to on-the-job training and training classes for specific volunteer areas throughout the Museum. Volunteers devote hours to practically every aspect of the Museum, from the trail and exhibits to facility rentals and marketing. “About two-thirds of our volunteers are in exhibit interpreting,” she explained. “They are the ones spread out throughout the Museum that talk to the public as they come through. Roughly one-third are involved in the care of the animals and plants—preparing food for the animals.”

To recruit new volunteers to support the Museum’s new building, Thornburgh looked for individuals of all ages. “I looked for people that have a heart for the mission,” she said. “People who are here to serve the Museum’s needs.”

Volunteers: the Lifeblood of the Museum Today the Museum has 467 active volunteers, with numbers surging to around 500 during the summer. To be considered active, volunteers must come in at least once a month. Many, however, have a regular schedule and volunteer several hours a week. All volunteers track hours and get Museum updates through the Volunteer Portal.

“Without volunteers we wouldn’t be able to offer nearly the level of service we do now,” Thornburgh said. “They outnumber the staff 4.67 to 1.”

To highlight these dedicated individuals and their service, Thornburgh holds an annual recognition banquet. Volunteers also earn free passes to the Museum and receive discounts at the café and gift shop.

Beyond the perks, volunteers gain so much from their time at the Museum. “They come away with knowledge,” Thornburgh said. “We’re willing to teach them and they come away with some actual skills and things to put on a resume. They meet new people and hopefully make new friends.”

For students, volunteering at the Museum offers opportunities for education and even future careers.

“Seeing a junior volunteer really find their passion and then decide they want to go into some conservation-related career field is exciting,” said Thornburgh. “Then you know you’ve had an impact.”

Some junior volunteers, students under age 17, dovetail their Museum hours with school research projects. “There was a student a couple years ago who did a study in horticulture on which plants filtered the most pollutants,” Thornburgh explained. “That excites me because they’re into it.”

After graduating, students can even turn their volunteering into a career at the Museum. In fact, nearly 42 percent of the Museum’s current staff began as volunteers.

Thornburgh has seen an increase in volunteers of all ages, from students to retirees.

“There has been an increase in volunteers,” she explained, “and one of the catalysts for this is that many of the schools are requiring hours. Even colleges are requiring service hours for students in many of their classes. And for college students, the collective good is more in the forefront of their minds than when I started here in 2003, so I think people are more aware of social issues and are more willing to serve.”

And this dedication to service is evident in many of the Museums volunteers. Jacob Andrews has been a junior volunteer  for two years. “I always associated the Virginia Living Museum with volunteers,” Andrews said. He chose to volunteer after visiting as a guest with his family.

Sabrina Kight, an adult volunteer, appreciates the opportunity to work with animals and children. As a volunteer in the  herpetology department, she cares for some of the animals on exhibit.

“In herpetology we clean out the tanks and I actually prepare the foods for the box turtles and the salamanders,” she explained.

What began as a visit to the Museum two years ago has become a regular routine for Kight. “I fell in love with it so the next day I called and I’ve been volunteering ever since,” she said.

For volunteers like Andrews and Kight, the Museum provides the opportunity to learn about subjects they’re interested in. 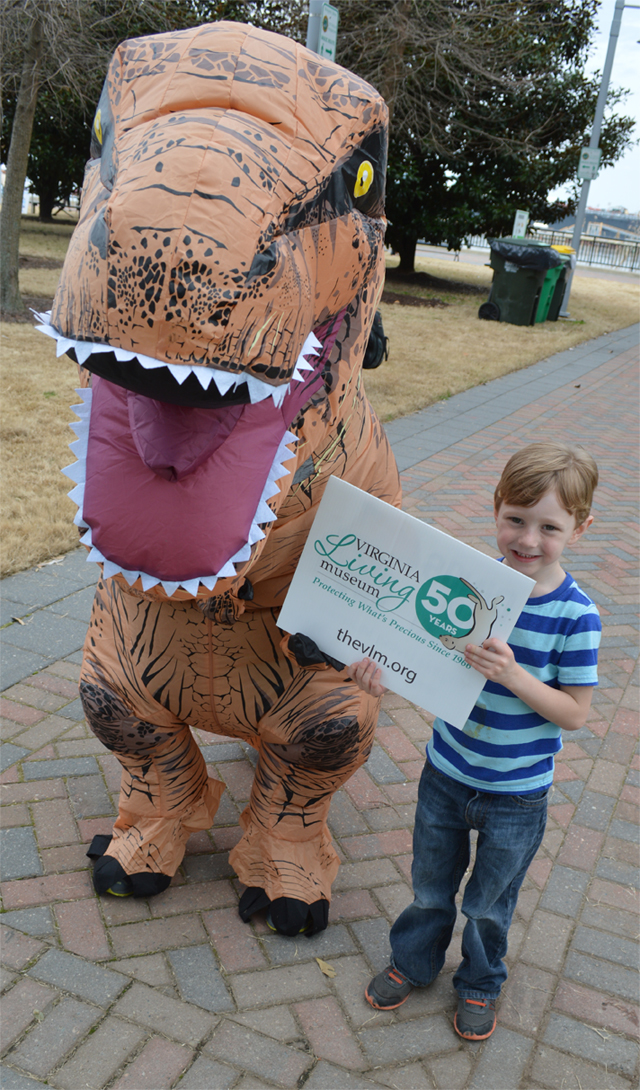 One lucky volunteer dressed as a Tyrannosaurus rex at the 2016 Newport News One City Marathon.

“We’re willing to teach people so you don’t have to come in the door with knowledge already,” Thornburgh said. “If you’re really interested in the red wolf, for instance, you can train for the outdoor trail and share your knowledge.”

Between brand new volunteers and seasoned veterans, their dedication and service truly runs the Museum.

“The people that are here are just really fabulous,” Thornburgh said. “The volunteers are great.”

VLM Through the Years > The Virginia Living Museum’s volunteers
Connecting people to nature through educational experiences that promote conservation.