By Virginia Fishes In Uncategorized, Virginia Fishes
The Virginia Living Museum turtle census for 2012 has officially begun!
For the past two years, the Museum has conducted a census of the basking turtles in Lake Maury (behind the Museum) in order to determine what the status is of the native turtles that live there.   We want to know if the (non-native) red-eared slider (Trachemys scripatelegans)  is outcompeting the native basking turtles in the lake.
In order to gather this information, we set live traps in the lake, hoping that the turtles will enter them.  If they do, they become trapped until they are released (alive).  The basking turtles we want to catch and learn more about are the: eastern paintedturtle (Chrysemys picta picta), yellow-bellied slider (Trachemys scriptascripta), and northern red-bellied cooter (Pseudemys rubrivenris). There are other turtles we might encounter, but we are focusing on those listed above. 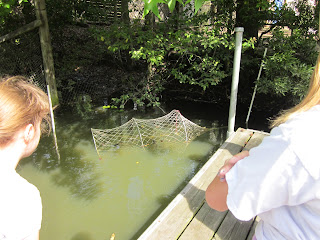 This season we are joined by six middle school students, Matt, Grace, Julia, Alisa, Wyatt and Phoebe.  When asked why they wanted to be part of the project they had a variety of responses:

“I want to see turtles in their native habitat”
“I want to learn more about turtles”
“I want to learn how to tell the difference between turtle species”
And
“I think turtles are cool and want to learn more about them”
We think turtles are cool too, and are glad that they are on hand to help.  Before we began, our budding herpetologists learned about turtle characteristics, practiced with the gear they would be using, and learned why studying non-native species is important; how non-natives can affect an ecosystem. 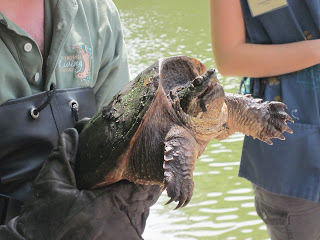 One of the snapping turtles captured from the lake

Unfortunately, our first session met with limited success.  Our students did learn how to measure turtles safely with calipers, they saw what a turtle trap was and how it was set and retrieved from the water.  They also got to see (up close and personal) snapping turtles from the lake.  Unfortunately, these weren’t the turtles we were looking for!  Yet, we knew the turtles were out there, as we saw them sunning themselves on the logs.  So, we turned to volunteer Larry Riddick, who has been part of the Wildlife Mapping program at the museum for several years, and can, with binoculars, identify sunning turtles on logs. 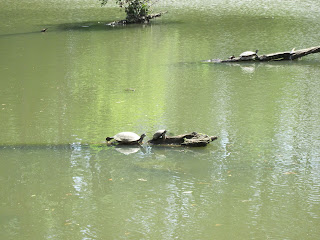 Several turtles basking in the sun on logs

Armed with binoculars, students learned how to identify turtles on logs, what field marks to look for, and what might make this a challenge.  All returned a favorable report on this part of their day, despite it not being what they were hoping for.  We still counted turtles, but were not able to collect some of the data we were interested in. 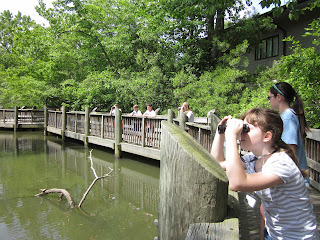 Our group visually surveys the lake for turtles

After our visual observations were through, we returned to the museum classroom to learn how reptiles and amphibians are classified, and met some of examples of each in the process.  We are hopeful that our next session will provide us with a hands-on experience with the basking turtles.

We’ll let you know how it turns out!