A Day Late and a Dollar Short

You know, I’ve been so proud of myself for keeping this up…even posting a day early when I know I won’t be around on a Wednesday…

So imagine my shock when I looked ay my calendar and saw the “Update Blog” icon proudly displayed across…YESTERDAY!  ACK!  Talk about a good time for a time machine…now would be it!  Or even a good improbability drive…no?  Well, guess I’ll just have to take my lumps and admit to being a day late.  I blame it on the calendar program…I’m quite sure that banner wasn’t there yesterday.

The sky is still desperately clinging to more water than I would like.  I’m waiting for the final break in humidity…the one that announces in no uncertain terms, “okay, Fall has arrived!”  The autumn months are excellent for stargazing…it’s cool, but not too cold…the sky is clearing up and visibility improves…sunsets are coming steadily earlier, giving us more nighttime to enjoy.

One of the most prominent objects in the sky right now makes its appearance in the late evening sky in the east.  It rises up, brilliant white and very steady, and more than a few people have wondered if they are seeing a UFO!  Don’t worry though, it’s not an alien invasion.  It is instead the regal planet Jupiter.

Jupiter is one of the brightest objects you’ll ever see in our night sky; fourth behind the Sun, the Moon and Venus.  Combine that brightness with a still-soupy atmosphere and you can get some strange effects.  Normally, the planets don’t twinkle.  Twinkling of stars is caused by the tiny bit of light we receive from a star getting jostled about by the moving air of the Earth – so naturally, twinkling is more intense under humid or smoggy conditions.  Planets are much closer to us than the stars, so their light tends to be stronger, and less affected by the air.  But on a humid night, even a planet can seem to fiddle, fidget, wink, flash colors, or move about slightly thanks to atmospheric effects.  Add that to our tendency to squint at something to try to “bring it into focus” and it’s not hard to see why magnificent Jupiter has been mistaken for an alien spacecraft. 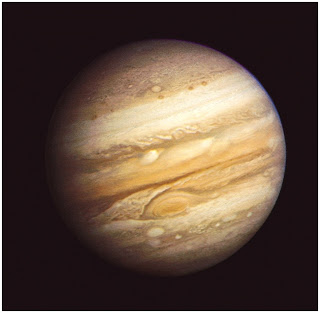 Another spacecraft Jupiter (and Venus, too) is often confused with is the International Space Station.  The ISS is quite bright, occasionally even exceeding Jupiter’s brightness as it crosses our sky!  However, there’s a big difference between Jupiter (or any planet) and the ISS – speed.  Planets are stationary, by and large.  Oh sure, they are orbiting the Sun, just like we are, but you won’t notice that motion when looking up at a planet at night.  If you stand and stare long enough (maybe an hour or two), you will notice that planets, like all other celestial objects, move slowly across our sky.  This is thanks to the rotation of our very own planet Earth – and that’s why all natural objects cross the sky from east to west.  The Sun, The Moon, the stars, the planets…everybody appears to move east to west across our sky thanks to the Earth’s own rotation on its axis. 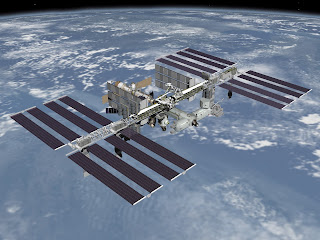 Spacecraft, however, move thanks to the initial kick from the rockets that got them up into orbit and the gravitational pull of the Earth.  So not only can they move in pretty much any direction we choose to set them, they can also move much, much faster than the rotation of the Earth carries objects across our vision.  The ISS, for example, circles the world in about 90 minutes, meaning that it will cross your patch of sky in about 5 or 6 minutes or so.  How can you distinguish the ISS from a plane?  Easy – planes always have some kind of blinking light.  The ISS will move fast, and shine rock steady.  The best way to be sure you’re looking at the ISS is check with the excellent satellite tracking website www.heavens-above.com.  You’ll need to tell them your location – latitude and longitude are best if you have them (try Google Earth for help) – and then they’ll tell you when and where you can look up to see satellites whizzing by over your head.  If you’ve never done this before, be warned – it is very fun and highly addictive!

Before I go, let me share some exciting news about Jupiter for those of you with telescopes…the South Equatorial Belt is back!  Jupiter’s rapid rotation for such a large planet (the gas giant is ten times the size of Earth but rotates once in under 10 hours!) causes its clouds to form into huge stripes around the whole planet.  Most of the time, these stripes are pretty constant – there are usually a couple large dark reddish belts around Jupiter which contrast beautifully with other whitish stripes.  Recently, the southern belt decided to take a vacation, disappearing from telescopic view for quite some while.  Now, whatever weather processes on Jupiter that allow such things to form have kicked back in, and the SEB is returning beautifully.  So check out Jupiter with your telescope (or even binoculars!) and enjoy the show.

Well, I guess that catches us up for now…and I promise to be on time in two weeks.
Carpe noctem!