I’ll See You on the Dark Side of the Moon

There is no dark side of the Moon, really.  Matter of fact, it’s all dark.

Pink Floyd had it correct, you know.  The Moon doesn’t generate its own light…like all the planets and moons of our solar system, it merely reflects the Sun’s light.  But what a beautiful reflection it is.  So let’s talk a little bit about the Moon.

It’s pretty much the easiest thing to observe in the night sky.  It’s big, bright, and details can be seen with nothing more than your eyes!  We’ve been looking at the Moon a long time – ever since man first raised his eyes to the skies.  Every culture around the world has seen things depicted in the patterns of light and dark rocks on the Moon…faces are common, both male and female…and numerous animals have been found cavorting across the face of the Moon.  What you see may depend on your vision, the clarity of the sky when you look, and your own imagination.

When scientists began investigating the Moon, the darker areas were quickly named “mare,” Latin for “sea.”  Indeed, early astronomers believe that the dark regions on the Moon might be water, filling the low-lying regions of the lunar landscape.  These regions were given names like “Sea of Fecundity,” “Ocean of Storms,” and “Bay of Love.”  Even after men traveled to the Moon and found no water on the surface at all, let alone oceans, seas, and bays, the naming scheme persisted.  There seems to be a permanent connection between water and the Moon

It turns out, there actually is!  The Moon’s gravitational influence is the primary reason why we have tides.  The Earth’s gravity keeps the Moon in orbit around us.  The Moon’s gravity tugs on the waters of Earth, forcing them to move up and down in response to its gravity.  The Sun gets in on the act too, but if the Earth had no Moon, the tides would be all but invisible to us.  Many species of life depend on the constant and regular motion of the tides…and many scientists believe that without the tides, life as we know it on Earth would not be possible.  Turns out those ancient astronomers were on the right track after all – the connection between the Moon and water is extremely important to all of us here on the Earth.

Observing the Moon is easy…just look up!  Okay, well, maybe it’s not that easy.  The Moon isn’t always visible in our sky – you have to know when and where to look to see it.  The Moon’s phases, or changes in shape, are caused by our perspective changing as the Moon revolves around us in its monthly cycle.  We see varying amounts of the daytime side of the Moon depending on where the Moon is relative to the Sun as it orbits around us.  Many people assume the best time to observe the Moon is during a Full Moon, since the entire side of the Moon facing us is lit up.  But that’s actually not true, for two reasons.  First of all, a Full Moon, by definition, is exactly opposite the Sun, meaning that it rises at sunset and sets at sunrise.  This might sound great – the Moon is visible all night!  But the means that you must wait until around midnight for the Moon to be high in the south, where it is easiest to observe.  And let’s face it…most of us are not quite that lunatic.  (Ha!  Fun play on words!) 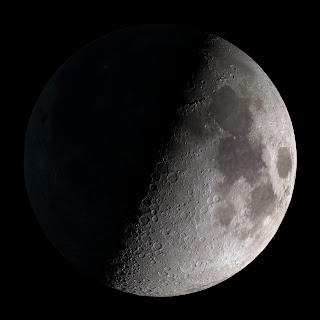 The second reason why the Full Moon is not the best for observing is that during a Full Moon, the light striking the surface of the Moon is coming pretty much from directly overhead, from the lunar perspective.  That means there are virtually no shadows, and very little contrast.  Shadows give you a sense of height and depth – something that really adds to your observing as you look at mountains and craters on the surface and try to get a sense of how high or deep they are.  The best time to observe the Moon is during the First Quarter phase – the Moon is high in the south around sunset, and the dark line the runs across the face of the Moon dividing the daylight side from the nighttime side (it’s called the terminator) is perfect for viewing – the shadows there are long and deep, and you get an excellent sense of depth perception when you scan along it with your telescope.

In fact, consider this an invitation to join us here at the Virginia Living Museum on the evening of October 8th.  Not only is that our regular monthly Star Party and Laser Light Night, it also happens to be International Observe the Moon Night, and we will be celebrating!  A First Quarter Moon will be gracing the skies, and, weather permitting, we’ll have our telescope trained on it to give you the best view possible.  We’ll have some special Moon-based crafts and activities for kids, and the folks from NASA will be on hand with their Driven to Explore exhibit...which includes a rare TOUCHABLE Moonrock!  There are only 8 lunar samples in the world that can be touched – don’t miss your opportunity to touch the Moon!  The festivities begin at 6pm, and are FREE to all, except for the planetarium and laser shows ($3 for members, $6 non-members).  We’ll see you there!

Until next time…
Carpe noctem!
~Kelly