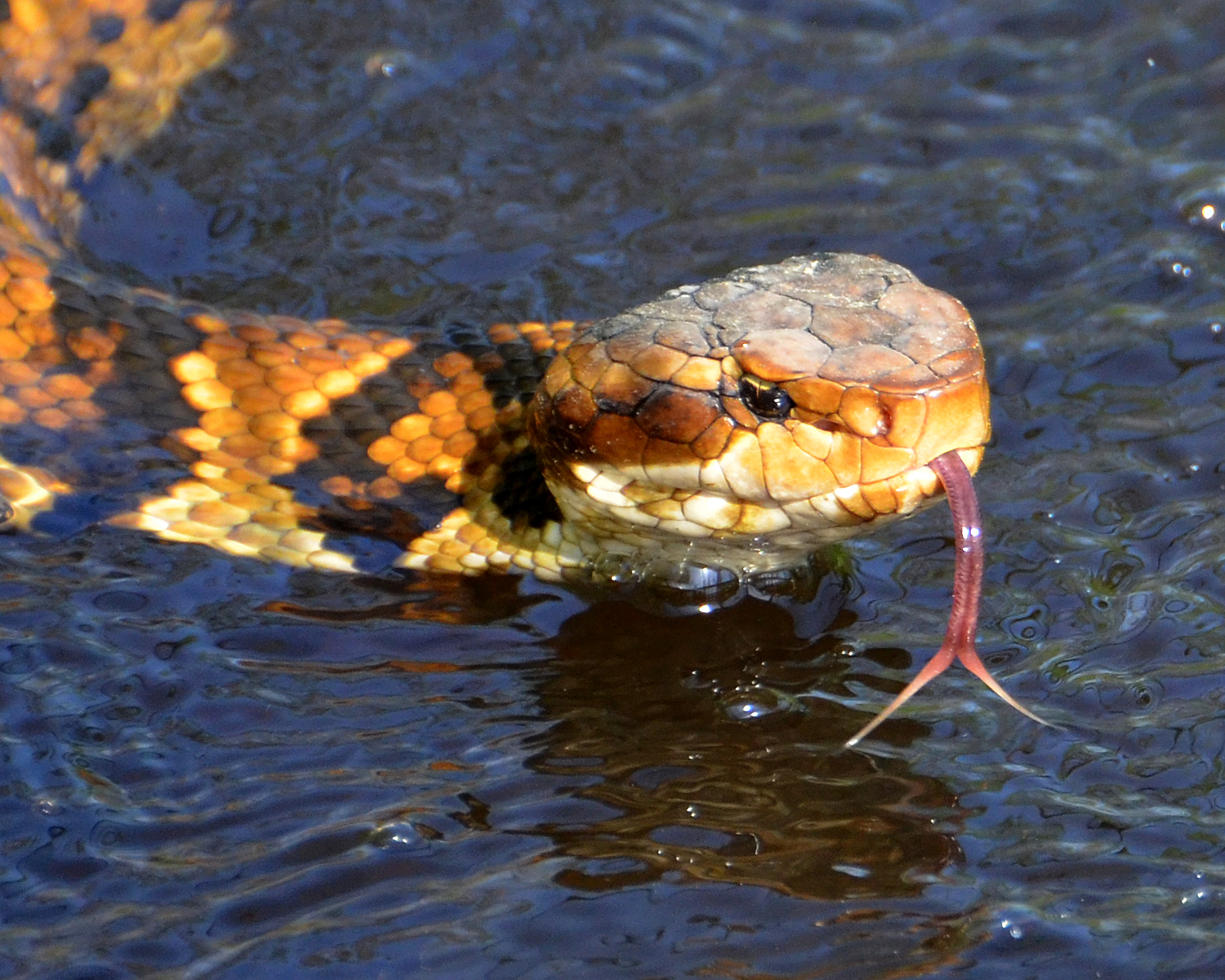 Virginia’s swamps and marshes are home to a huge variety of reptiles, but few are as feared or disliked as the Eastern Cottonmouth. Perhaps the most common venomous snake in South East Virginia, this species is commonly found in our region and in close proximity to human activity. But just how dangerous is the Eastern Cottonmouth? 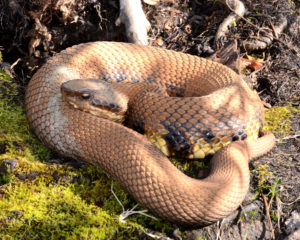 Despite their fearsome reputation, the dreaded “Water Moccasin” is actually a fairly docile snake. If approached or bothered, these snakes may stand their ground and act in defense, but they are largely non-aggressive, preferring to flee from predators or attempt to scare them away. The cottonmouth will hiss loudly, while exposing the white interior of its mouth which gives the cottonmouth its name. If you encounter this snake in a defensive posture, give it space and it will likely move on. Eastern Cottonmouths are an semi-aquatic pit viper, possessing the same heat pits as the Copperhead and Timber Rattlesnake. Like the other pit viper species, cottonmouths are a stout, thick-bodies snake with a wide, triangular head and slit-shaped pupils. This particular species can be identified by a dark band that run across their eyes like a mask. While their bite is painful and potentially fatal, bites generally only occur when people attempt to capture, kill or handle them. Cottonmouths are typically found along the edges of swamps, marshes or other wetlands, basking or hunting prey. Though they do not represent a significant threat to people, cottonmouths are killed in large numbers due to human fear and ignorance. And they are not alone; many harmless aquatic snakes including brown water snakes and red bellied water snakes are killed simply because they are misidentified as venomous cottonmouths. The easiest way to tell these species apart is to watch them swim; non-venomous snakes swim with only their head above the surface, while the entire body of a cottonmouth floats! If you want to get a safe,up-close view of a cottonmouth, be sure to stop by the Virginia Living Museum and check out our exhibit in the Cypress Swamp habitarium. Learn to recognize these beautiful snakes, and tell others how amazing the Eastern Cottonmouth truly is!

The Cottonmouth is a very powerful swimmer. They are even known to occasionally swim out into the sea! They have successfully colonized islands off the Atlantic and Gulf Coast. (Don’t worry, you won’t run into these guys during your next trip to the beach!)