It’s been a hot couple of weeks here in Virginia, but did you know that caves remain nice and cool despite the summer heat? In fact, most caves remain at about 50 degrees F all year round! Providing a shelter against poor weather conditions and extremely high or low temperatures, caves are havens for a variety of animals that prefer consistent temperatures. Lurking deep within a cave, similar to our Virginia Underground Gallery, one might discover a wide range of salamanders living in the perpetual darkness! Many plethodontid or “lungless” salamander species inhabit North American caves. They have adapted to live in complete darkness, and are safe from many of the perils of life on the surface. Thanks to the unwavering temperatures of a cave, these animals can remain active year round. Life in total darkness has its share of challenges. Animals must adapt to be able to find food in the absence of light. Cave salamanders are predatory species, and prey on insects and other arthropods. So how do they find their food? Using a special organ called the nasolabial groove, a small slit between the nostril and the lip, these salamanders use chemoreception to hunt. This organ is lined with sensory glands, and much like a snake’s tongue, allows them to sense chemical cues in their environment! During enrichment, our herpetology keepers provide crickets to our cave salamanders so they can practice their natural hunting behaviors even on exhibit!

Here at the VLM, our salamander exhibit contains two of the plethodontid species commonly found in Virginia’s caves: the Spotted-Tail Salamander (more widely known simply as the Cave Salamander) and the Atlantic Coast Slimy Salamander. You can visit them in our cave habitat where they climb the stony walls and swim in still pools. 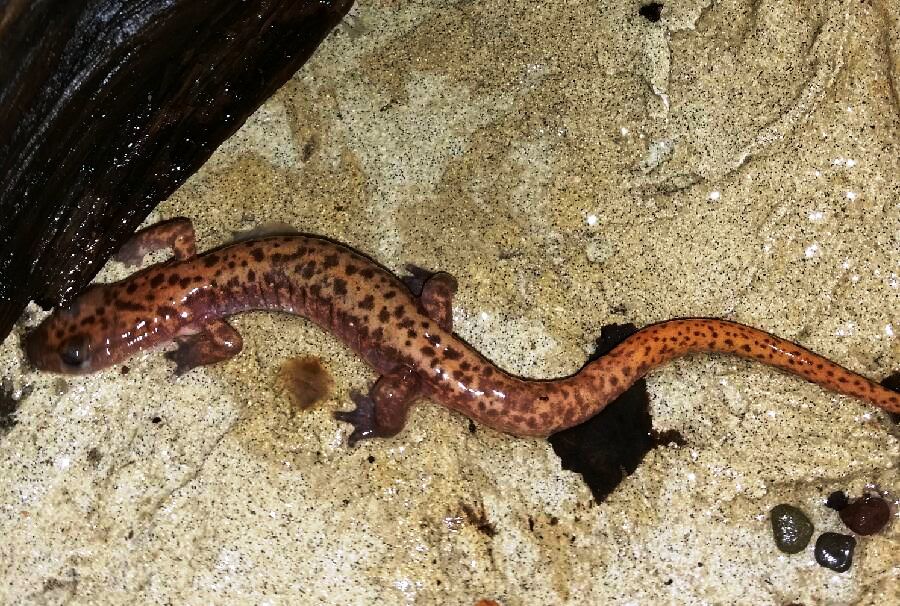 (Top) The Atlantic Coast Slimy Salamander is generally black with occasional white speckles or blotches. (Bot) The Spotted Tail (or Cave) Salamander is easily identified by its bright orange hue and black speckling.

Caves are pristine habitats that host an abundance of wildlife despite their seemingly hostile environment. Many of the species that live there, including amphibians, are incredibly sensitive organisms are are often negatively affected by human activity. The caves themselves are filled with delicate features, some so fragile that they can be disturbed by changes in light levels, humidity, temperature and even air flow! For these reasons, caves are protected by state and federal laws, prohibiting tampering that may ultimately damage those habitats. All kinds of amazing structures can be found in caves, created by water flowing through the cave carrying calcium and other minerals.

You might not be able to find a real cave to escape the summer heat, but guests are always welcome to cool off in our Virginia Underground Gallery! Come to the VLM and see our cave salamanders close up, alongside the other animals that call Virginia caves their home!