The VLM displays only native fishes and invertebrates – with a few exceptions in the coral reef exhibit – so I exert a great deal of effort to maximize the number of interesting species we display. Fortunately, Virginia has one of the greatest number of fish species in the country due to our diverse geography and temperate climate, boasting over 200 freshwater species, not including all the saltwater species living in and visiting Virginia waters throughout the year. Any fisherman can recognize a bass, catfish, or sunfish, but most people are not familiar with the vast majority of species that create Virginia’s great species diversity: over half of the species are from the minnow family (67species) and perch family (45 species). 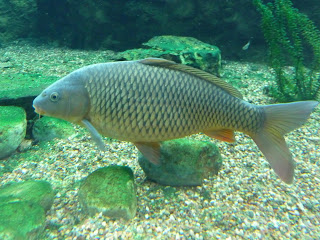 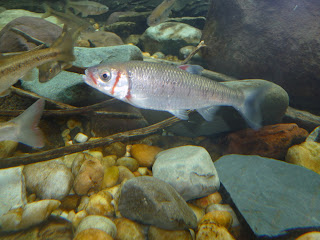 The warpaint shiner is also a cyprinid

Even an expert has a difficult time identifying many “minnows”, but carp, goldfish, dace, shiners, chubs, and many other groups are all recognizable “minnows” or Cyprinids, but most are dace or shiners that are extremely difficult to discern with the naked eye. Perches include popular game-fishes such as the yellow perch (obviously), the walleye and sauger, but the vast majority are “darters”. As described in a previous blog about the “king of darters” the roanoke logperch, despite their striking beauty, they are little known and even less seen. 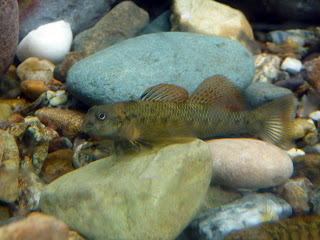 Longfin darter, looking good but not quite ready for primetime

My primary goal for the VLM fish collection is not to just increase diversity, rather to display any and all Virginia species that we logistically can, and foremost of those the ones the public find interesting and unusual. Many species we house here are from these two groups, many of which are in my opinion the most beautiful; one of which is the longfin darter. No fish person will dispute the beauty of a candy darter, tangerine darter, or a redline darter– just to name a few, literally – but darter fans (yes there are some, one of which I know to have a large, detailed tattoo of a redline darter across his ribs) often overlook the longfin darter.. This darter is relatively common and is not unusually attractive throughout the year, but when the males become ready to spawn they can really put on a show. They are aptly named for their exceptionally long second dorsal fin, which becomes an orange-speckled flag to attract females. These blue and orange beauties are also notoriously secretive yet combative; staking out a secluded spot and chasing off trespassers relentlessly. 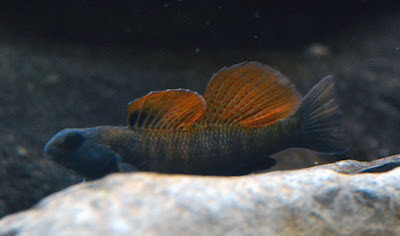 Darters are fascinating to watch, and extremely rewarding to display, but they require specialized care and specialized facilities. Most species need water much colder than room temperature (ours is kept at 53 degrees F), so a chiller or heat exchanger is needed, which is often far beyond what the average hobbyist is willing to spend. Also, they (most species) require moderate to high water flow and very high water quality; both of which can be difficult in a closed system. Powerheads to create current and lots of filtration help, but most of all, the staff and I contribute a LOT of physical effort: hand scrubbing algae off of rocks, gravel washing detritus, etc. In a natural healthy stream system, rains would wash away waste, organic matter, silt etc, but in a closed system this must be removed – often! But in the end its worth it. Our Mountain Stream exhibit is my favorite exhibit here and one of my favorites anywhere. But just like in the wild, this exhibit and these beautiful unique fishes go unnoticed by most people right out in the open. 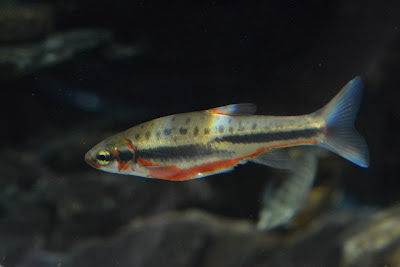