By Virginia Fishes In Uncategorized

Oyster reefs are one of the most productive habitats in the Chesapeake Bay; hundreds of species of aquatic plants and animals grow on and among their shells. The oysters themselves improve water quality and clarity by filtering sediment and plankton out of the water. The natural accumulations of live oysters that have settled upon the shells of their previous generations – essentially what constitutes “oyster reefs”- also serve as natural breakwaters that protect shorelines from erosion.

Last April, we partnered with Professor Russell Burke of Christopher Newport University to help him construct one of many artificial reefs he has installed throughout the Bay to help promote settlement and growth of the American Oyster in the wild. Wild populations in the Bay are at an all-time low due to decades of over-fishing. The most critical obstacles to their recovery are excess nutrients and excessive siltation that smothers the reefs and spat – or young oysters. By placing specially designed concrete “castles” and “diamonds” in strategic positions, spat can settle above the mud, and can now build one-on-another in an ever expanding reef. 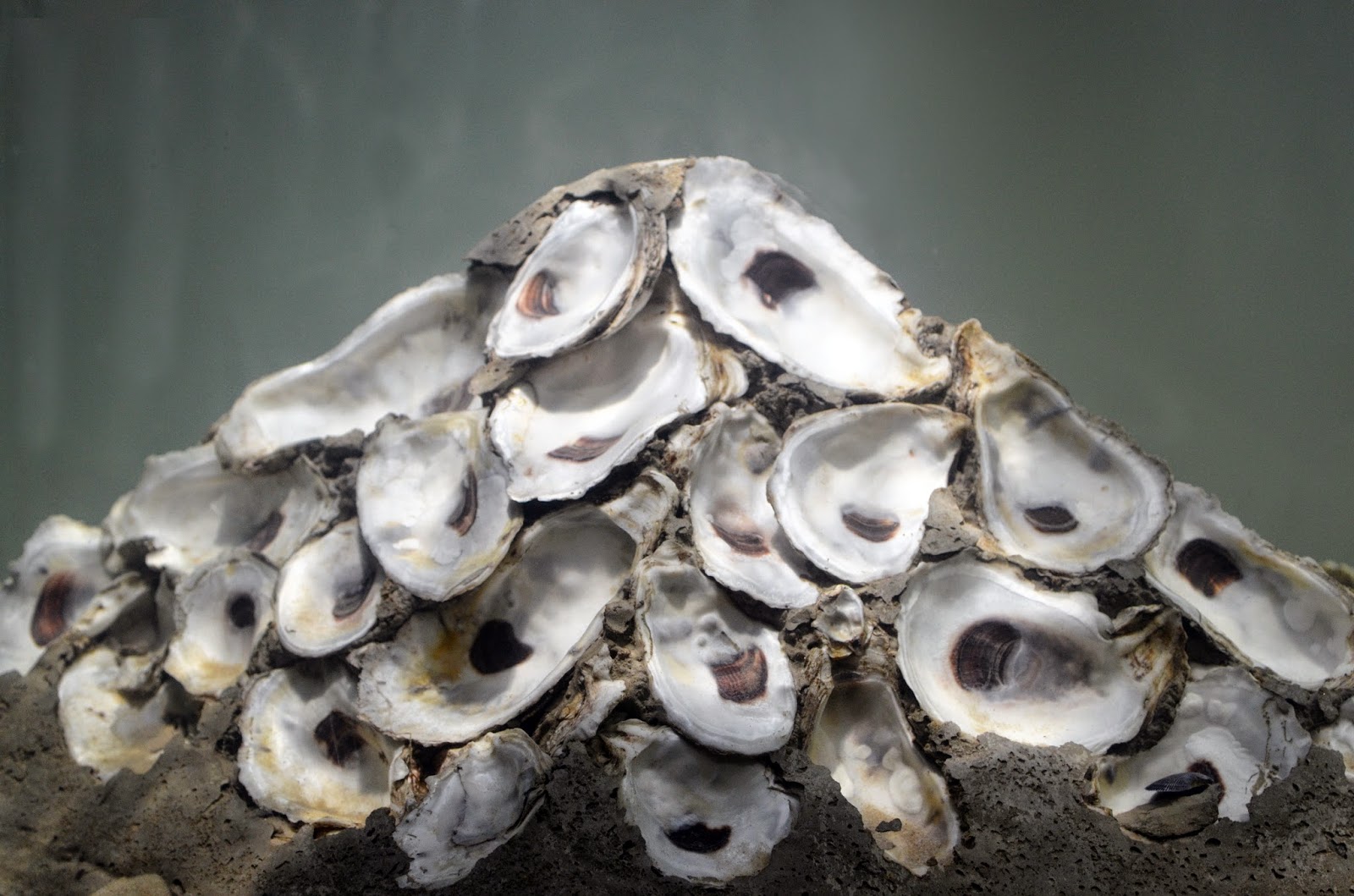 “Before” Oyster castle with no oyster growth 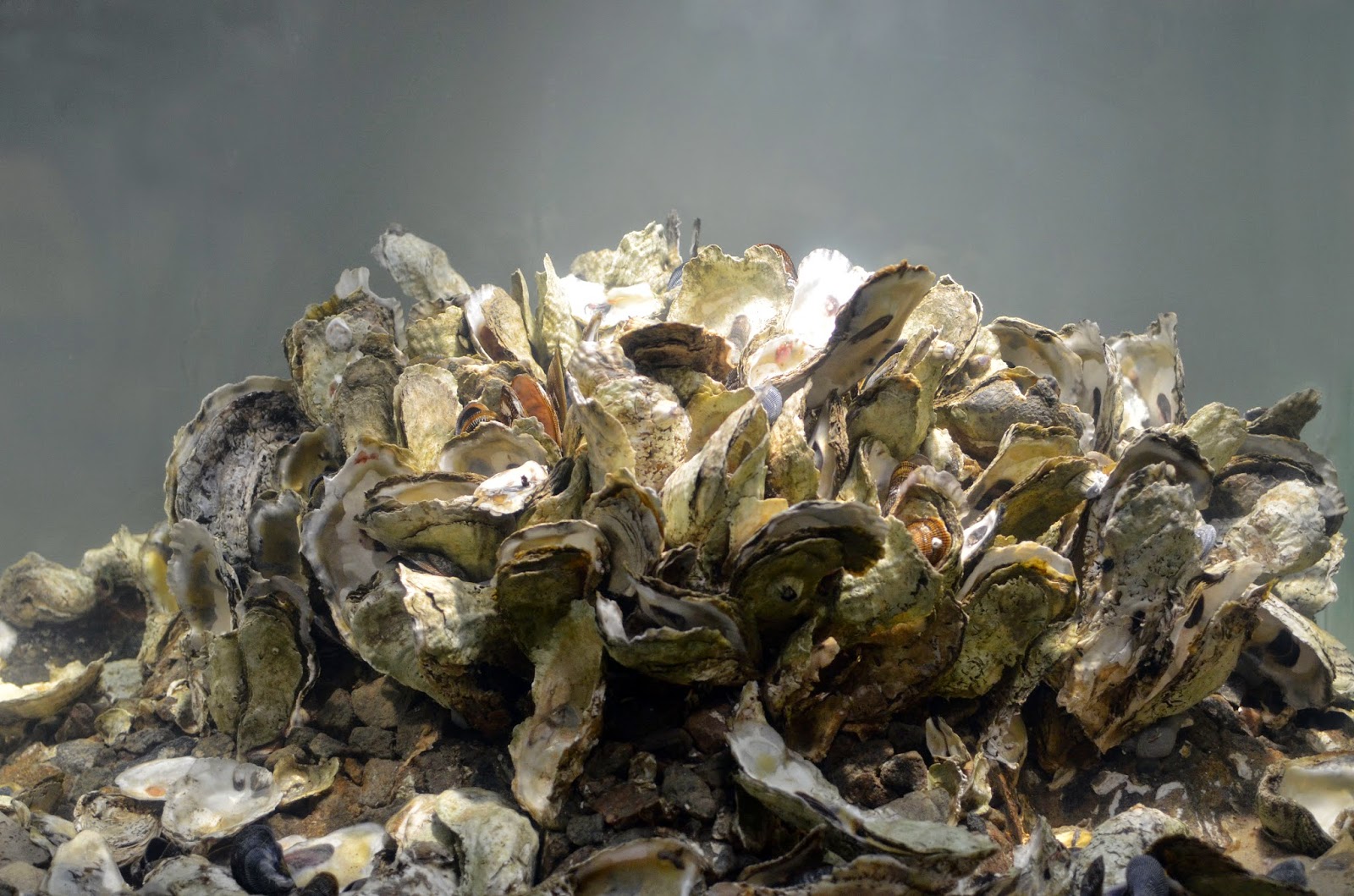 Last month, we constructed an exhibit to represent the “before” and “after” of an artificial reef. The left of the exhibit displays an unsettled diamond while the right side displays a diamond from an artificial reef Dr. Burke placed in the Bay; the results are striking. Every square inch of surface area on the “after” diamond is completely covered in massive adult oysters and mussels, as pictured above. All of these shells in turn host: sponges, bryozoans, algae, amphipods, isopods, worms, crustaceans, and a large variety of fishes. It is a complete ecosystem in miniature! 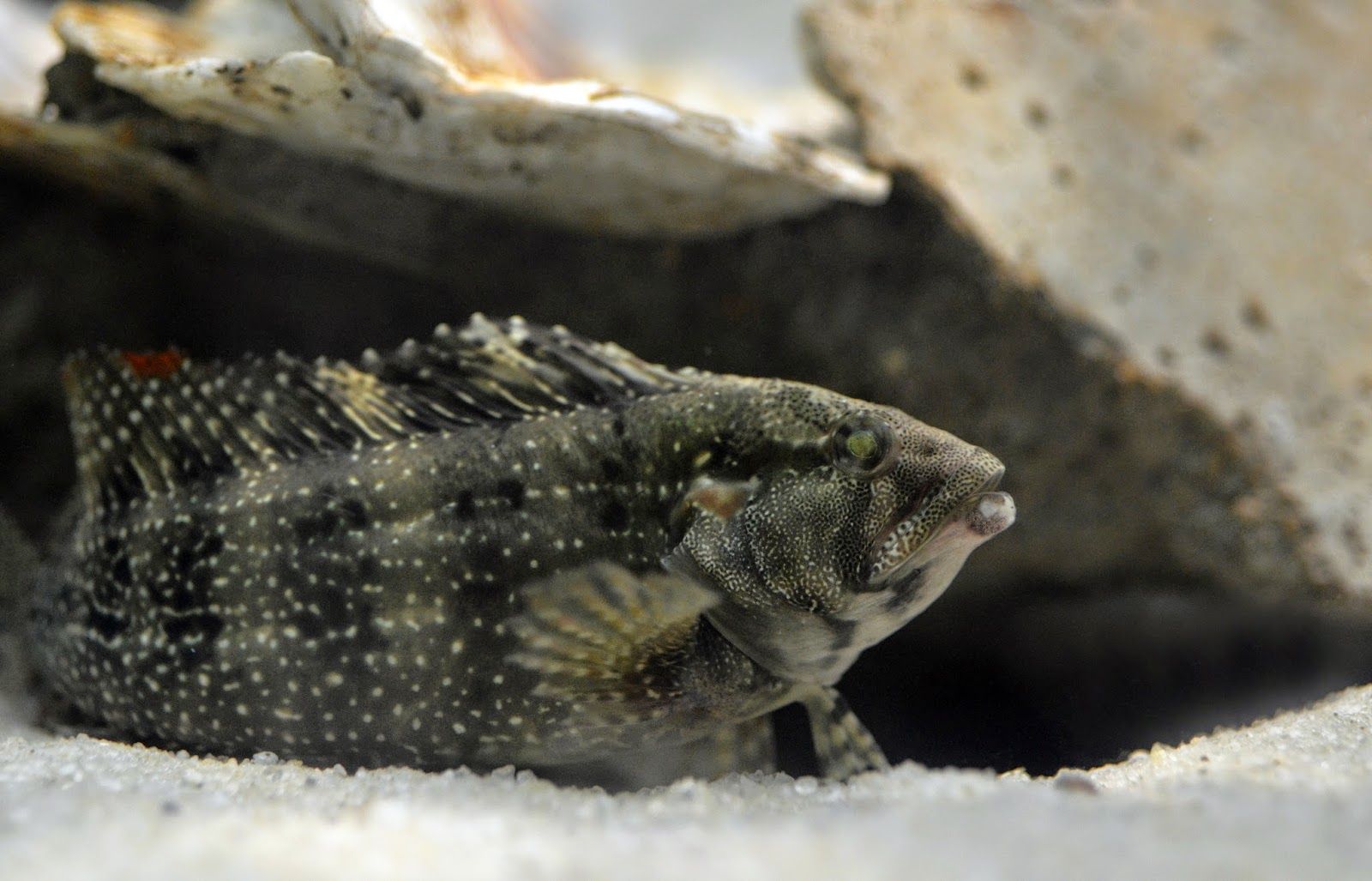 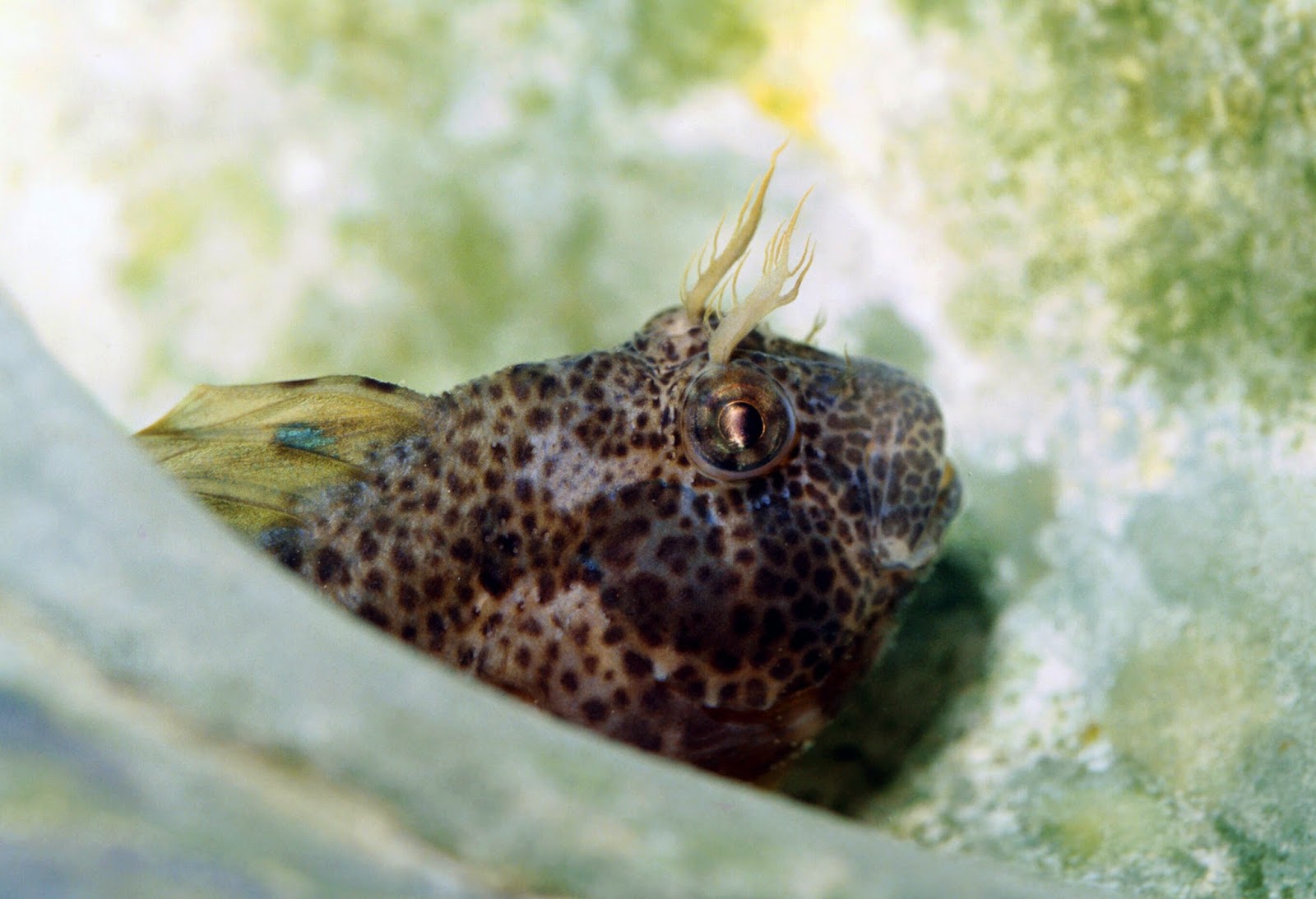 … along with feather blennies (Hypsoblennius hentz). 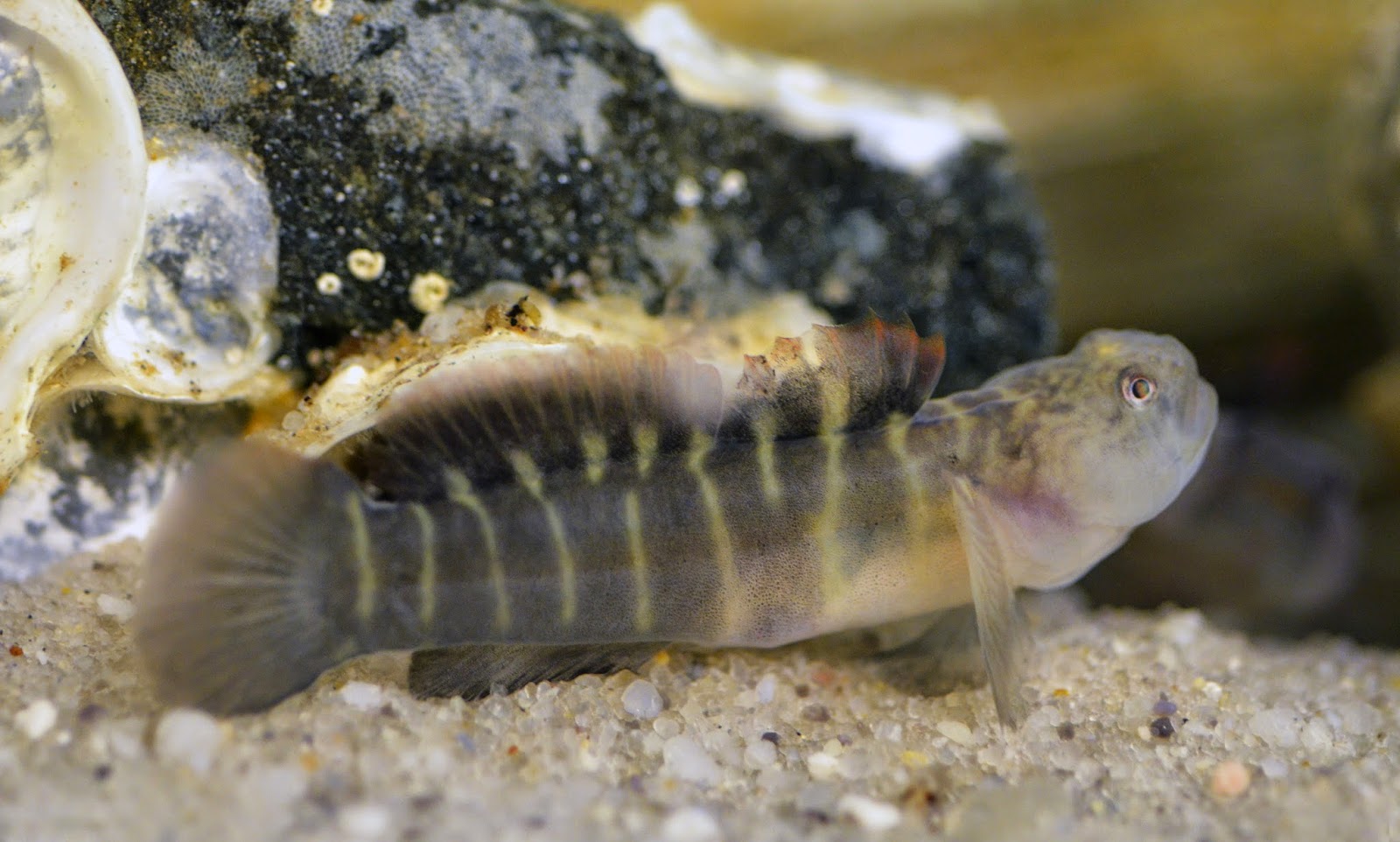 Naked gobies (Gobiosoma bosci) live in the nooks and crannies of the reef. 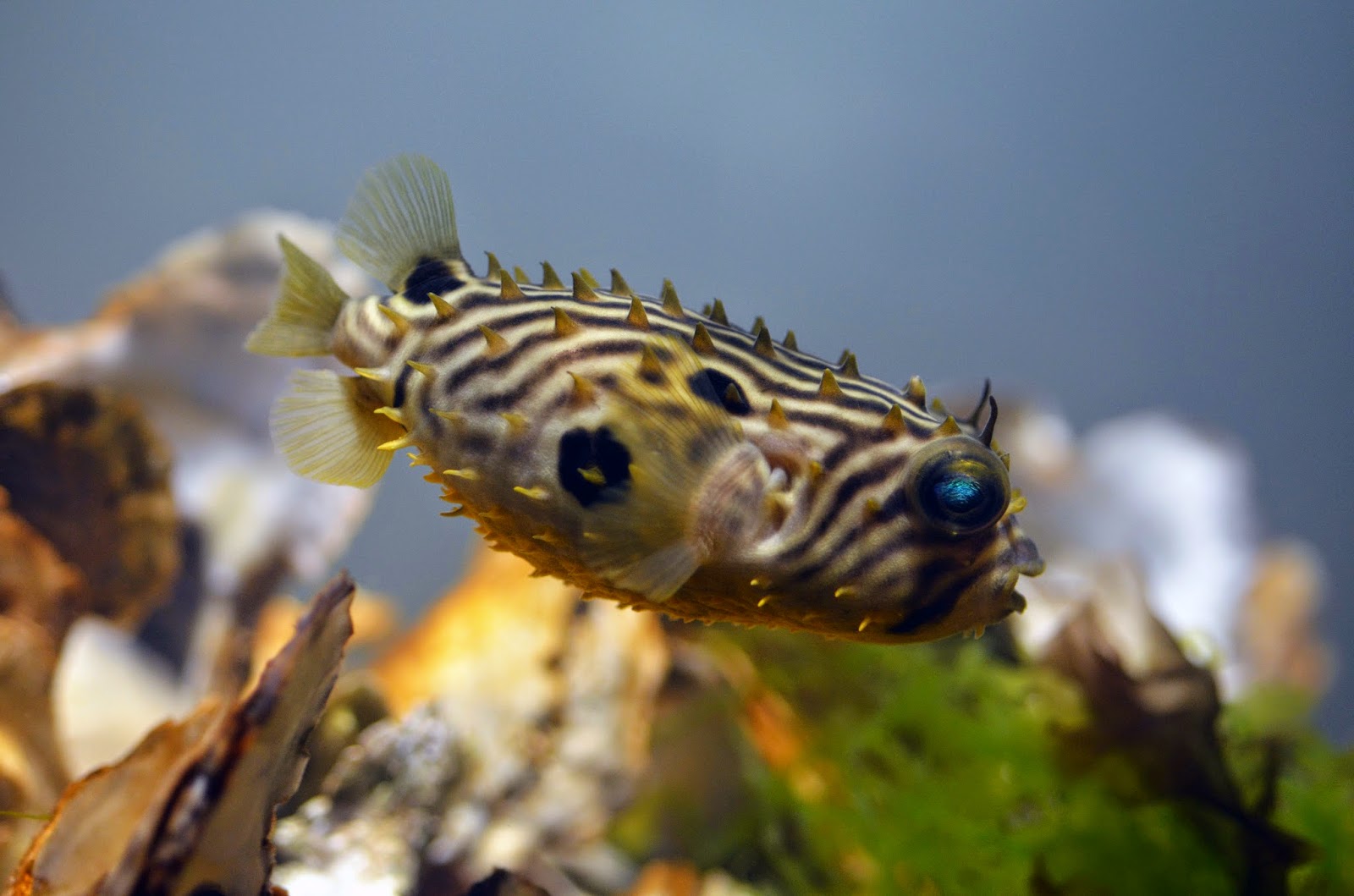 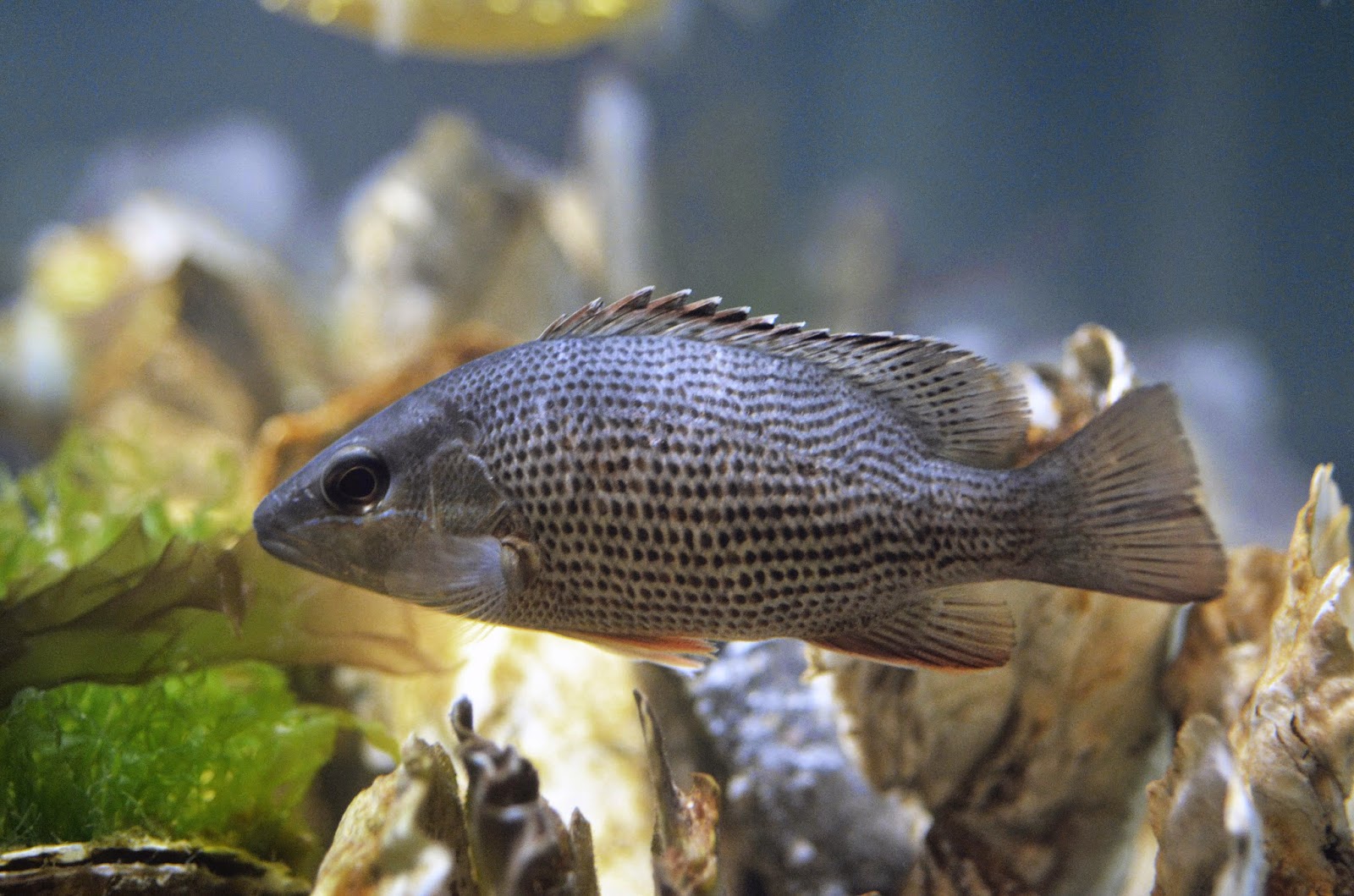 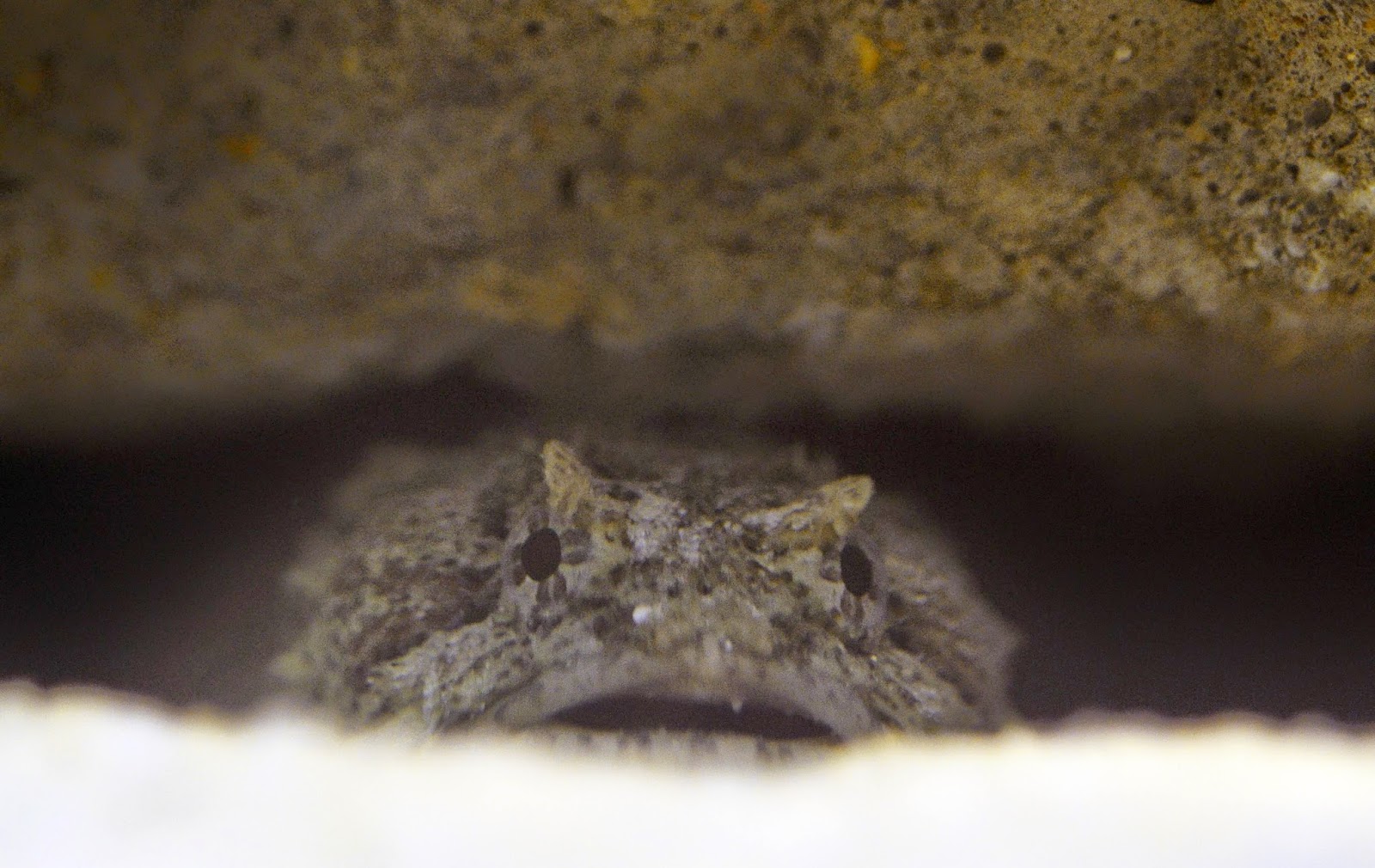 Oyster toadfish (Opsanus tau) are a stealthy ambush predator that often bury in substrate beneath the reef. 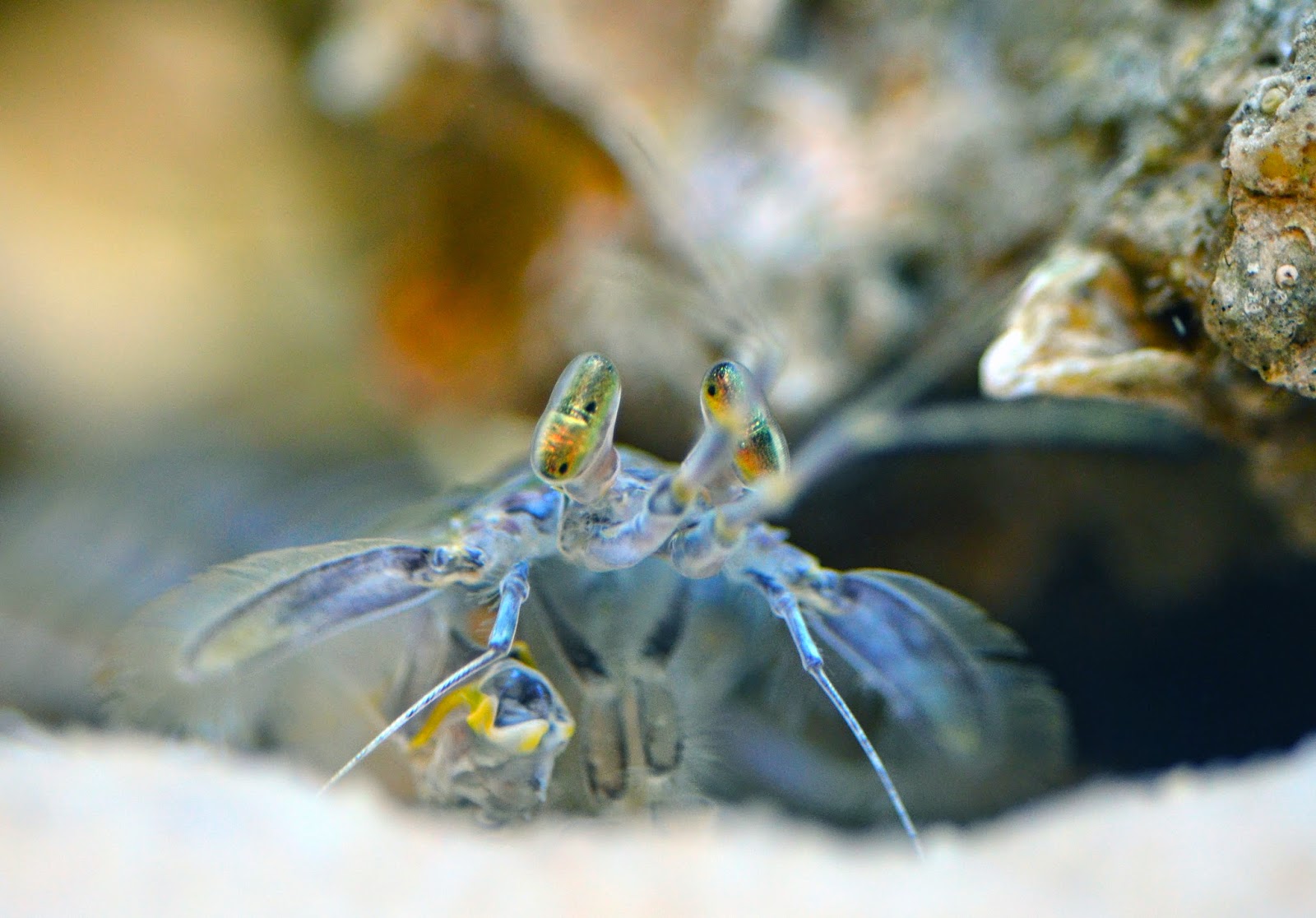 Like the oyster toadfish, mantis shrimp (Squilla empusa) will hide in tunnels they’ve dug around the rock, and ambush any prey that come along. 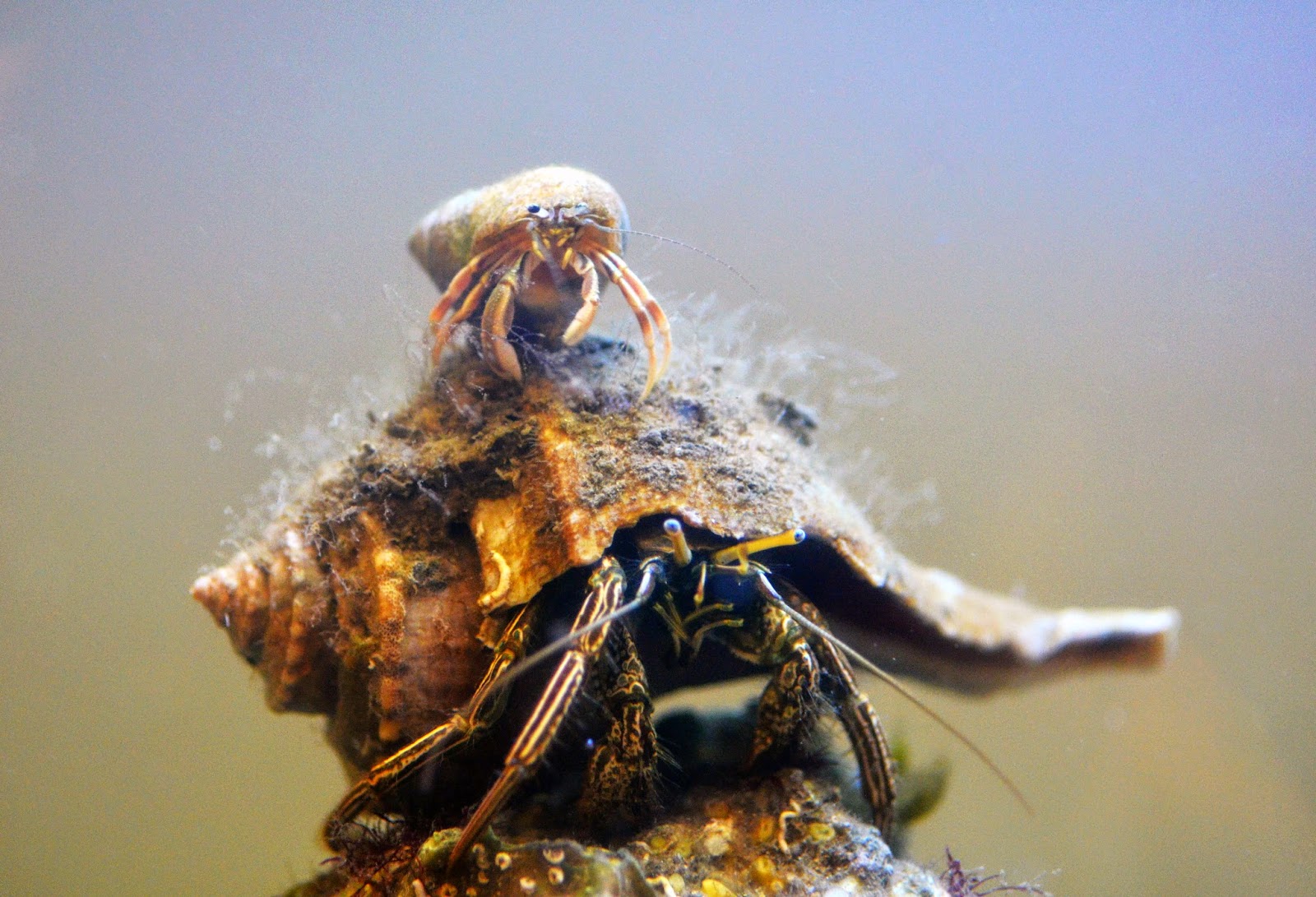 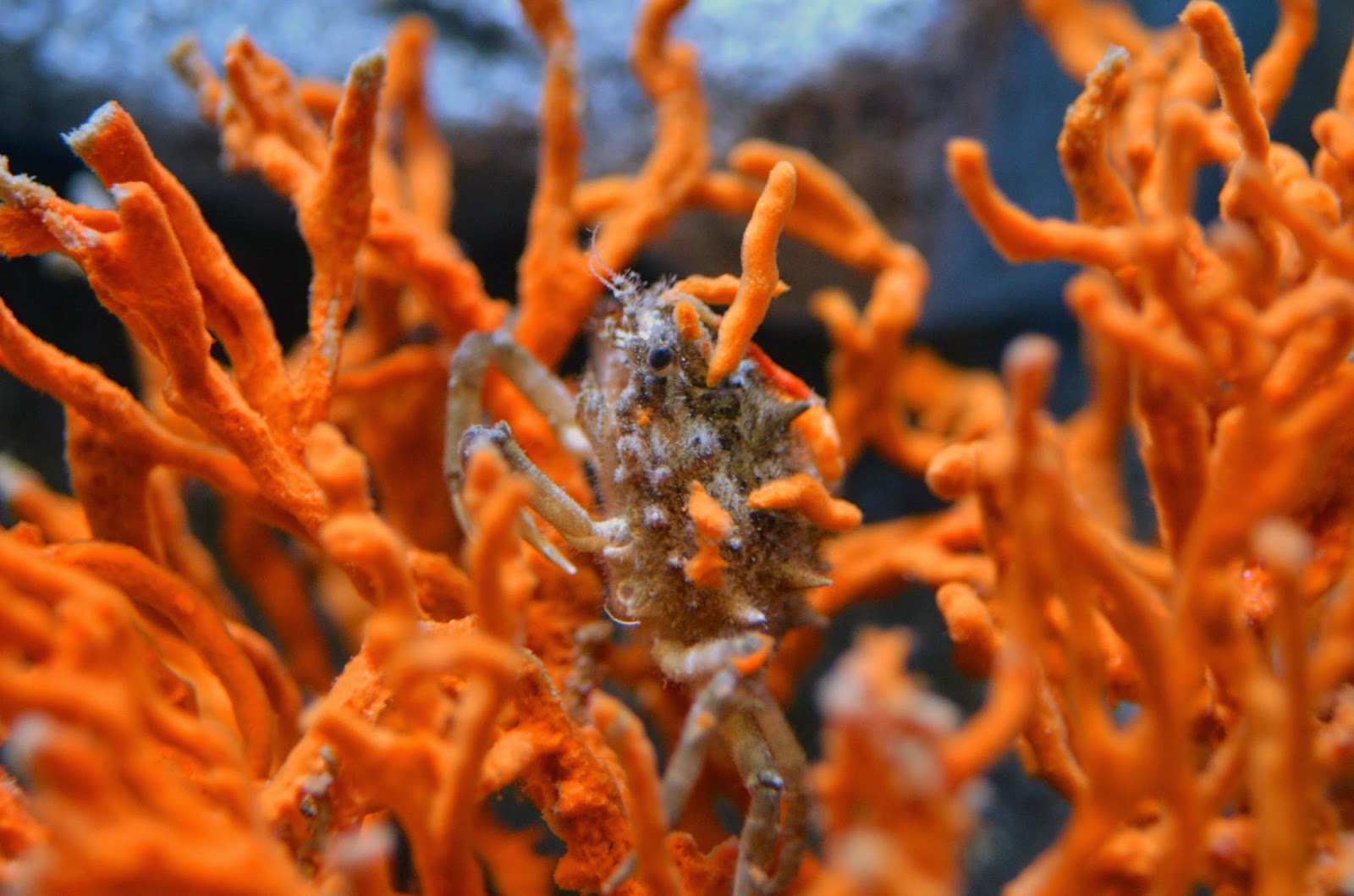 A common spider crab (Libinia emarginata) decorates himself with pieces of a beard sponge to blend into its environment.

By displaying the actual results of the restoration work and how rich the reefs are in species that rely on them – not to mention the commercial worth of the oysters to humans – we are displaying what is at stake besides the fate of the oysters themselves: the health of the Chesapeake Bay. Once known for its natural riches, it is increasingly known for a system badly out of balance. A system in which the American oyster once lay at the very heart.