Actually, I’m kind of not.

We had an amazing night last Saturday, observing the Moon.  The NASA exhibit was awesome…I touched a piece of the Moon!  Our Moon is incredible!

And that got me thinking…what about all the other moons?  Does anybody realize how incredibly awesome they are?

We tend to focus on our own Moon.  Makes sense…it’s big, bright, and plays an important role in the existence of life here on Earth.  But among the major planets there are 168 other moons…all equally fascinating worlds in their own right!  So let’s explore some of the other moons out there…and kind of play a little compare and contrast with our Moon, if you will.

Earth has one moon.  That’s it…just The Moon.  Most of the other planets have many more moons indeed…Jupiter takes the prize for the most (if you don’t count ring particles!) at 64 known satellites.  Even Mars has 2 moons – double what we’ve got!  The only planets with fewer moons than Earth are Mercury and Venus – neither world has any moons at all.

Size matters though…Mars’ two moons are extraordinarily tiny.  Phobos (Fear) and Deimos (Panic), as the Martian moons are named, are most likely captured asteroids.  They are small potato-shaped bodies, barely findable in a telescope from here on Earth…and even then only when Mars makes a close approach to us.  Such jagged chunks of stuff can be found orbiting all of the gas giant planets as well…the majority of the solar system’s moons are weird little lumpy leftovers from the formation of the planets. 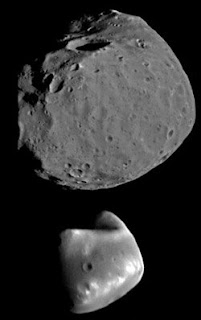 On the other hand, our Moon is not the largest in the solar system, either.  That distinction goes to Ganymede, largest moon of Jupiter.  In fact, Ganymede is larger than the smallest major planet…at 3,280 miles across it beats Mercury’s size by more than 200 miles.  This massive moon is truly a world in its own right…it shows evidence of tectonic activity, its own magnetic field, and it might even have an atmosphere.  Talk about your colossal moon! 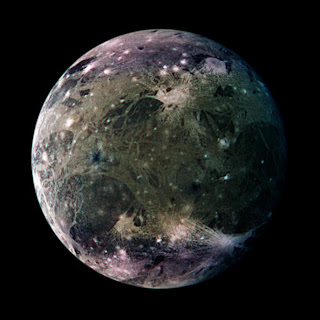 Speaking of atmosphere, our Moon hasn’t got one.  If you plan on visiting the Moon, make sure you bring your own air.  The moon with the densest atmosphere?  Saturn’s enigmatic Titan.  The moon, explored by the Huygens lander, has the distinction of being the only moon known with an atmosphere consisting of more than trace gases.  It is a dense soup of hydrocarbons, with numerous distinct layers…shrouding the moon and looking like a heavy layer of orange smog.  So impressive is this moon’s atmosphere that it is believed to be, like Venus, a super-rotator – that is, the atmosphere actually rotates much faster than the moon itself does.  The Huygens probe showed us incredible details about Titan, but so much more remains to be learned. 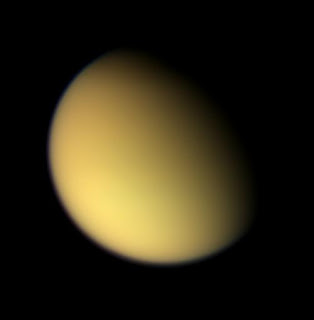 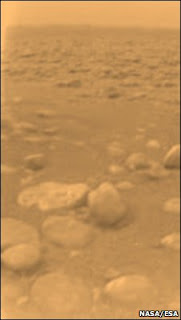 The surface of Titan from the Huygens probe.  Courtesy NASA/ESA.

Keep in mind, we’ve limited ourselves at this point to explore the moons of the major planets.  There are more moons than that in the solar system!  Of the 5 confirmed dwarf planets, 3 have moons: Eris has Dysnomia, Haumea has Namaka and Hi’iaka, and Pluto has Charon, Hydra, Nix, and the newly discovered P4 (it’s so new it doesn’t have a name yet!).  Pluto is only 2/3rds the size of our Moon – and it has 4 moons of its own!  Incredible! 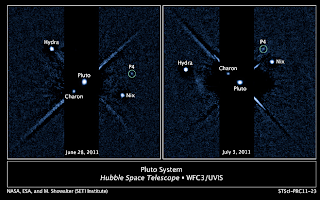 Pluto and its 4 moons from the Hubble Space Telescope.  Courtesy NASA.

Oh, so you think only planets, be they major or dwarf, can have moons?  Not so…the asteroid Ida has a moon, Dactyl, first discovered by the Galileo spacecraft as it passed by on its way to Jupiter.  The solar system is rich with moons!  Take some time to explore them…both by reading up on them and by checking them out through telescopes – the moons of Jupiter and Saturn can easily be seen in telescopes from Earth!

Ida and its tiny moon Dactyl from the Galileo spacecraft.  Courtesy NASA.

Have fun mooning around, and I’ll see you next time!
Carpe noctem,
Kelly