By Virginia Fishes In Uncategorized, Virginia Fishes
Virginia has many ponds and all of them contain a surprising amount of life. Ponds are generally defined as water bodies that are shallow enough for sunlight to reach the bottom. Therefore, they are often covered with and full of aquatic vegetation and plankton, making them great places for small fishes, amphibians, and insects to live and reproduce. Duckweed, waterlilies, parrot feather, pickerel weed, cattails are all common pond plants and hide many of the pond’s life from our view, but also provide complex underwater habitats. 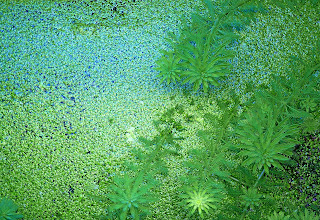 Duckweed and parrot feather cover a pond’s surface
Ponds may experience drastic seasonal fluctuations in temperature and oxygen levels, so the fishes that live there must be adaptable and hardy. Common pond fishes include mosquito fish, largemouth bass, bullhead catfish, several sunfish species, and one or more pickerel species. Of these, there are two species that are especially beautiful, and even more elusive: the redfin pickerel (Esox americanus) and the bluespotted sunfish (Enneacanthus gloriosus). 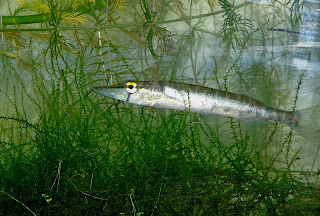 A pickerel lurks in vegetation
﻿﻿﻿
Neither of these fishes get very large, but more than make up for it in style. ﻿﻿The redfin pickerel is most often under 8 inches or so and the bluespot reaches only around 4. Both are relatively common in southeastern coastal ponds.
Redfin pickerel are the smallest member of the pike family which includes the musky, northern pike, and the most common chain pickerel. Although they are small, they are as voracious as their relatives, gorging on almost anything they can swallow. As ambush predators they spend most of their time motionless and hidden in vegetation; additionally they are mostly too small to be caught by anglers and thus are rarely seen.
Blue spotted sunfish are shy fish that also stick close to vegetation and woody debris. Despite their shy nature the males display very flamboyant iridescent blue spots, giving them their name. They feed mainly on small invertebrates.