More jellies and the lemon sharks claim their first victim

Jellies are standard display animals at public aquaria due to their beauty and downright strangeness. But they are difficult to culture and even more difficult to procure from another institution via trade. So as a short-cut we have been collecting them and displaying what is seasonally available. Right now the resident jelly – and therefore the one currently on display – is the sea nettle Chrysaora quinquecirrha. They are notorious around the Mid-Atlantic for ruining beach outings with their irritating stings, but they are beautiful and plentiful at this time of year. Hopefully, later in the year we will be able to collect and display my local favorite the cannonball jelly Stomolophus meleagris. They are much more difficult to collect as they are very fast swimmers and have excellent senses that allow them to avoid capture; so much so they seem to see you coming and head the other way, quickly! 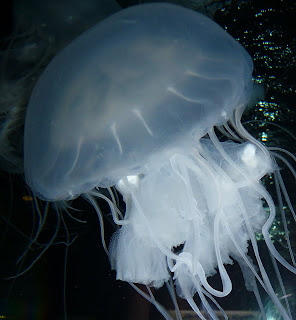 A sea nettle on display at the VLM

Today marks the first official casualty due to lemon shark aggression. After I performed the routine check-in for the upper level of the building, which includes cleaning the acrylic on the Chesapeake Bay Aquarium, and all seemed well, I was called to the tank by a staff member. A spadefish lay mortally wounded with four large softball-sized chunks removed from it. Apparently, the lemon sharks got hungry and decided to feed themselves. This is problematic on a few levels. Now the sharks have had success devouring a tank mate. There have been bite marks on others but until now all had survived. Also, I value all the animals here including the spadefish and never want to expose animals to uneccessary injury or death. I have raised or collected all of the spadefish (and most of the other species as well) at the VLM and feel responsible for the well-being of each. And lastly, I dive with the sharks, alone for now, and must have a renewed awareness of their activity during dives. While I certainly am not afraid of them at this point, I also do not want to experience the loss of any softball-sized chunk out of me. And as they grow the issues will only escalate.