The Coral Reef Exhibit has been running well, the water cleared and the chemistry has stabilized. It is now the new home for several corals, anemones, and fishes. As the system matures, each animal will find its home within the exhibit and learn how to interact with their tank mates. Already the bubble-tip anemone has moved several times. Anemones can be very mobile and often move about at night to find the most suitable combination of light and current. 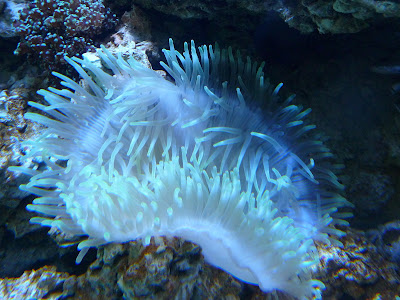 A bubble-tip anemone on exhibit about 16 inches across
Similarly, soft corals have the ability to move as well, but not nearly as fast or as often as anemones. Soft corals are just that, soft; they lack the calcareous skeletons of stony or hard corals that create reef structures. Soft corals are also generally less reliant upon symbiotic zooxanthellae as hard corals and therefore do not need as much light. 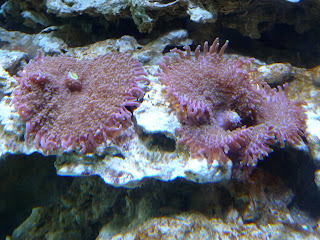 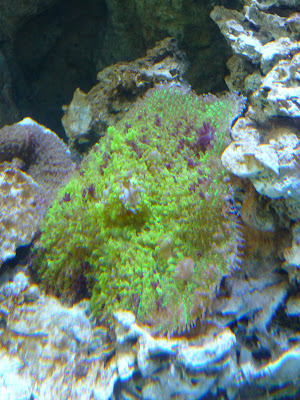 Two different species of hairy mushroom corals in the exhibit.
Corals can vary widely as to flow requirements, light levels, and feeding behavior, and positioning is critical. Often one species will aggressively defend or even take over the space of another by stinging or even sending out digestive filaments that kill its competitors’ polyps. Frogspawn corals (Euphyllia spp.), such as the one shown below, are considered aggressive and thus must be given space. 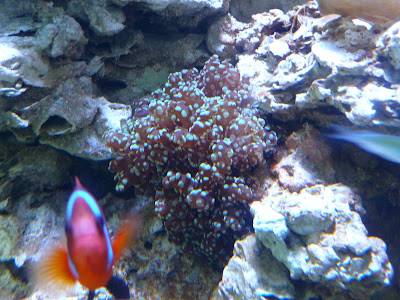 Frog spawn corals may be aggressive towards other coral species.
Once the corals and anemones were positioned (for now), the fishes were added. Fishes also can be aggressive towards each other, so it is important to consider their potential conflicts, now and as they (some of them) get larger. Certain species like to bury, others such as clownfishes associate with an anemone or coral. Other fishes such as engineer gobies make burrows, while many species prefer the crevices and cracks within rocks or hard coral skeleton. To further complicate matters, some fishes have a tendency to pick and nip at coral polyps. Unfortunately, many angelfish and butterfly fishes are not considered “reef friendly” for this reason and cannot be put in the exhibit despite their beauty. We did add a flame angel (Centropyge loriculus) as the one pictured here, despite the risk (considered low).
We also added two firefish (Nemateleotris magnifica), a small, peaceful and attractive coral reef fish, pictured below.