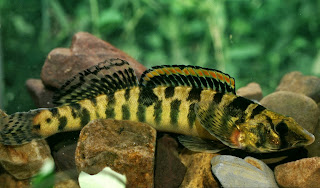 The “king” will soon be at the VLM! The king of what? The king of darters! Darters comprise several Genera of the Family Percidae (perches) and are typically small stream fishes but may inhabit swamps, ponds and lakes as well. And the king is Percina rex – “rex” literally means king – the Roanoke logperch. This fish is not only beautiful, but is one of the largest darters in North America, reaching up to 6 inches. It also is one of the most endangered. Listed as a Federally Threatened and Endangered species, P. rex inhabits only streams in the Roanoke River drainage, but even this small system is losing ground. The Roanoke logperch requires a clean stream bottom to feed and reproduce and many of its native streams are being degraded by sedimentation and human activity. 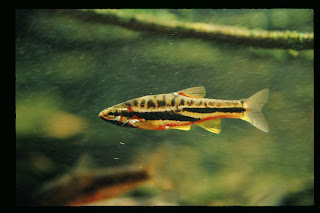 We have been lucky enough to acquire some of these rare specimens to display through a loan from the VDGIF‘s Aquatic Wildlife Conservation Center. The fish were part of a freshwater mussel study and cannot be released into the wild, so they have generously agreed to let us display 10 of their beautiful animals. The aquarium staff and I will be revamping the Mountain Stream exhibit, which currently contains many darter, dace, sculpin and shiner species, to remove many of the darter-eating sculpins currently in the exhibit and add some specialized habitat to accommodate the logperch; they like to overturn rocks with their snouts to search for food. We will also be adding a great deal more darters and dace (such as the mountain redbelly dace pictured above) to the exhibit. Look for the changes around the end of August. 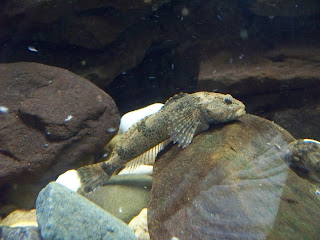 A banded sculpin in the Mountain Stream exhibit, they often prey on smaller stream fishes