The Dog Days are Back

Well, here we are again.  It’s August.  The weather is hazy, hot, and humid.  Going outside for more than about 4 seconds results in sticky wet clothes, lots of sweat, and generally feeling nasty really fast.  It is not, by any stretch of the imagination, an astronomer’s favorite time of year.

And yet, there’s still stuff to talk about, even if we’d rather stay inside while we do it! 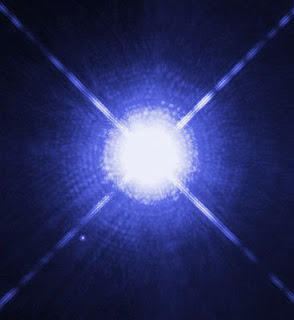 The ancient Greeks noticed that in August, when things were getting pretty hot, the star Sirius rose in the East just before the Sun, meaning that Sirius shares the sky with the Sun virtually all day.  Since Sirius is so bright, the Greeks figured it must be pretty close, and the extra heat in August was caused by Sirius adding its light and heat to the powerful rays of our own Sun.  The Romans and the Egyptians also shared this same belief – and in fact, the Egyptians were especially attentive to Sirius, as the Dog Days occured just before the annual flooding of the Nile.  Score one for the ancients, no?

Well, the ancients were unaware of just how far away stars are.  They were correct in their assumption that Sirius is pretty close to us – it’s about 8 light years away, or 47 trillion miles.  As close as that is as stars go, that’s still much, much too far away for Sirius to have any kind of effect on our weather.  The Sun is only 93 million miles away, and that’s the cause of our weather changes.  The heat at this time of year is the result of the Earth’s tilt – the Northern Hemisphere is tipped towards the Sun during summer, giving us long days and lots of intense sunlight.  No additional stars required.

Don’t feel too bad for the ancients.  They might not have been right about everything, but they did hand down some wonderful stories and ideas that are still fun to share.  Take the exciting tale of Perseus, son of Zeus and legendary hero.  His story is best known today as the campy classic film Clash of the Titans (trust me, for maximum enjoyment, stick to the original, not the sad modern remake).  You might want to rent it around August 12, and enjoy a midnight movie at home.  When the film is over, head outside and look up.  You should be just in time to catch some of the annual Perseid meteor shower, which will peak around 2AM on the morning of August 12.  Meteors will seem to come from the direction of the constellation Perseus, so put him at your back if you can. 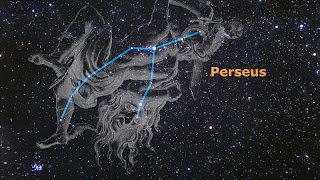 Staying away from bright sources of light will also help…and the best way to enjoy any meteor shower is from the comfort of a lawn chair so you can watch the sky as long as possible.  The beautiful streaks of light you see are bits of Comet Swift-Tuttle disintegrating in the Earth’s atmosphere.  Want more information on meteor-watching.  Come by the museum any day at 1:30PM for our Virginia Skies program – one of our staff astronomers will be happy to help you with your questions about meteor showers, or any other astronomical topic!

And, just in case you were wondering…that bright golden star in the West in the early evening is Saturn, still nicely visible.  Out a bit late and noticing a bright white star in the East?  That’s Jupiter.  Enjoy!

Cancel Reply
Cosmic Strings > The Dog Days are Back