Something Wicked This Way Comes

Oh yes indeed.  Halloween is this coming Monday.  If you have little kids in your house, like I do, your days are filled with costume prep, costume changes, plans to meet friends and trick-or-treat the best neighborhoods (the ones where you can get the most candy!) and hiding the candy you’re supposed to give out from your husband.

You might not think of Halloween as a particularly astronomical holiday…but hey, my tag line up at the top says “Connecting astronomy and space science to…well…just about everything.”  So…let’s look for some spacey Halloween fun.

The celebration of Halloween is often linked back to a Celtic festival held around this time of year called Samhain, which literally means “summer’s end.”  As the days begin to shorten and the nights lengthen thanks to the tilt of Earth as we orbit the Sun, the residents of the British Isles (and many other places around the world) would hold a final party as the harvest came to an end, and preparations for the coming long winter ended.  During the winter, travel would be difficult, if not impossible, and this last celebration before the months that many people would spend shut in the their homes against the poor weather was a special one.  So astronomy comes into play right from the beginning of this spooky holiday.

But surely there isn’t anything spooky about space itself, right?  Well…think again.  Space is filled with creepy and crazy things…mostly hidden in nebulae, those enigmatic clouds of gas and dust found throughout our galaxy (and indeed, all others).  In reality, these clouds are either leftovers from the deaths of stars, or stellar nurseries, where new stars are being formed.  But sometimes, we can’t help but see something else in them.  For example, can you see the cackling face in this nebula? 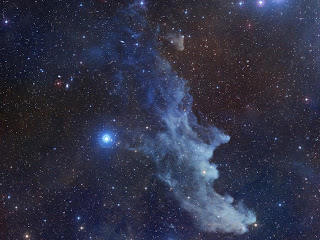 This is the Witch Head Nebula, and the resemblance is truly striking!  I certainly wouldn’t want to see that laughing at me through my eyepiece…well, actually, that would be kind of cool!

Not afraid of wicked witches?  Try this one on for a scare. 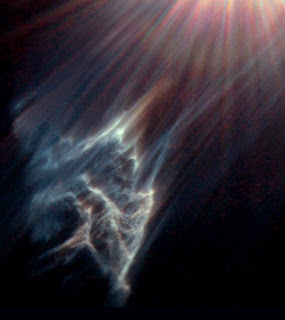 This one is called the Ghost Nebula, and those wispy tendrils truly do make it seem as if something is swooping down towards us.  An apparition worthy of a Hollywood movie…except this is the real thing, and located in the Pleiades star cluster, which will soon be gracing our winter evening skies.  Still not convinced space is spooky?  How about one more? 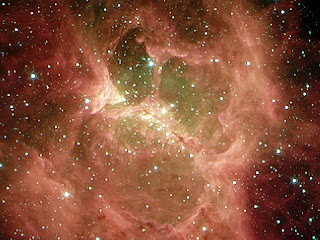 Now that is one creepy face.  Bearing a striking resemblance to a human skull, this nebula has the unimaginative name of DR 6.  I think the Skull Nebula suits it far better, however.  It sometimes called the Galactic Ghoul…which is pretty darn creepy, if you ask me.

All right, you got me.  Space isn’t really creepy…it’s our own active imaginations that see spectres and spooks in the skies.  But it certainly is fun, isn’t it?  Speaking of fun, I hope you’ll join us this Saturday October 29th at the Abbitt Planetarium for some fun in the planetarium as we run Fright Light, our Halloween Laser Spook-tacular.  Showtimes at 7pm, 8:30pm, and 10pm.  Come on down for some terrifyingly awesome music, wicked cool laser lights, and even some sweet treats.

However you decide to celebrate, have a safe, fun, and spooky Halloween!
Until next time,
Carpe noctem,
Kelly