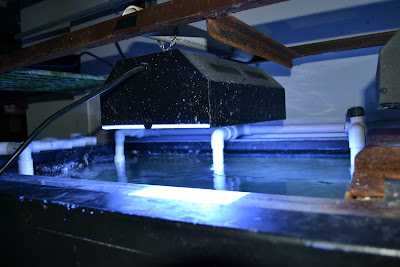 The white pipes are returns that have valves to control strength of flow and fittings that can be angled to control direction of flow.

The first step in the process was to drain the exhibit and remove the animals. Corals and anemones attach strongly to the rocks, so their entire rock has to be removed or they have to be separated, which can damage the soft tissue. When possible we removed the entire rock, but several of the large bubbletip anemones were attched to the walls and had to be pried off. Next the fishes were captured. Most hid until there was very little water left. The corals, fishes and anemones were then put in a holding tank with enough lighting to maintain the corals/anemones. While the exhibit was still damp, I power washed the inside with a pressure washer to remove unwanted polyps and algae. Then all the old substrate was removed and discarded. 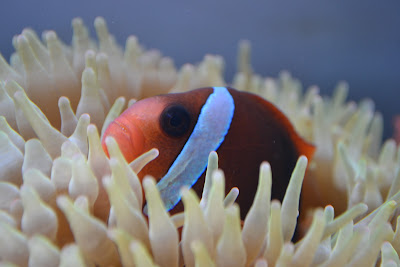 Tomato clown in a bubbletip anemone in coral holding

After the tank was thoroughly cleaned and dried, work on the life support upgrades began. The new pump is three times more powerful, and eliminates the use of additional powerheads for flow, so we reduced electric use. The new pump’s power allowed for a sand filter where waste is physically removed. The additional flow also let us put several more returns (where the water returns to the tank after filtration) and valves to control the flow precisely. Then the new substrate (cleaned and sterilized sand mixed with crushed coral) was added. Several pieces of coral were epoxied to the interior of the exhibit for looks and settlement areas for live coral and anemones, clean rocks were added, and then it was filled with water. 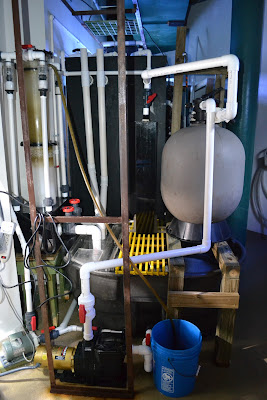 The new pump and sand filter behind coral

The moment of truth comes when the new system is turned on again filled with water. There were inevitable problems and leaks in such a large undertaking and there were in this case. No need for details, but I spent all day today drying out from an early soaking. The final step is to let the water in the system clear, adjust the flow, then add the fishes, anemones, and corals back. There are a few exciting additions/changes there though: Omaha Zoo sent us some bubbletips, Jenkinson’s Aquarium is sending some Montipora capricornis frags, we are getting a large number of Convict gobies from Houston Zoo that will all be new to our Coral Reef exhibit. We are excited for the new animals and hope you will be too.