The Little Robot that Could

I’ve got a friend who loves little robots.  And no, it’s not Grant Imahara.  She’s a science educator here at the museum with me.  And I have to confess, I totally understand.

There’s something wonderful about a little, plucky machine, doing its job despite all obstacles.  Maybe that’s why we love movies like Wall-E so much – little robots are just so darn cute!  Okay, so I’m anthropomorphizing…a lot.  But I can’t help it.  Because the subject of this post is a truly amazing little robot – MER-B, better known as the Mars-exploring robot Opportunity. 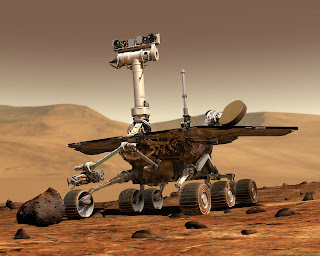 An artist’s conception of Opportunity on the surface of Mars.  NASA
It’s hard to believe, but Opportunity and its twin sister, Spirit, arrived on Mars in January 2004.  That’s right – this rover, which was designed for a 90-day mission, has now been traveling around on the surface of Mars for over seven years.  That right there is reason enough to love this intrepid little robot.
The science achievements from the Mars Exploration Rover program have been nothing short of extraordinary.  We’ve learned an incredible amount about Mars and its history.  Thanks to the rovers, we know that Mars did indeed have a wet past, and most certainly still has water which occasionally makes a surface appearance.  Opportunity discovered the first meteorite on another planet – Heat Shield Rock – while investigating the site where its own heat shield landed.  The rover has traveled about 20 miles across the surface of Mars, inspecting rocks, digging holes, taking photographs and measurements, and performing numerous other scientific tasks.  It has survived dust storms, a cranky shoulder joint, and even getting stuck in a sand dune for a time.  Its exploits are far too numerous to detail in this space, but I strongly encourage you to read about them.  Opportunity’s story is an incredible one, full of achievement, drama, and most of all, the strength and determination of her human crew back here on Earth.
I felt it was time to interest people in the Mars rover again, because Opportunity has achieved quite a milestone in the past few days.  It has been traveling toward Endeavour Crater on Mars for three years, and at long last, arrived at the massive hole in the Martian surface just last week, sending back this lovely photo. 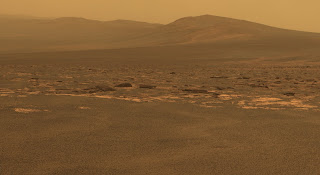 The far rim of Endeavour Crater as seen by Opportunity.  NASA.
Thus Opportunity begins another new chapter in its long and varied history.  Its twin, Spirit, sadly has ended its mission, and has been out of contact with NASA for more than a year.  But Opportunity seems to still be going strong.  I hope this “Little Rover That Could” keeps on keeping on for a long, long time to come.
If you’d like to see Mars, and wave hello to the rover, check your early morning skies.  Mars shines in the eastern sky before sunrise, looking like a dull orange or yellowish star.  Keep watching it, because Mars and Earth are now approaching each other rather than receding, so the Red Planet will grow steadily in size and brightness in the coming months.  While Opportunity may not be able to see you, nor you see it, it’s incredible to think that as you look at a small planet millions of miles away, something made by human hands is driving along, helping us discover the wonders of another world.
Until next time,
Carpe noctem,
Kelly

Cancel Reply
Cosmic Strings > The Little Robot that Could