Gov. Gerald Baliles meets an opossum at the opening of the Virginia Living Museum in 1987.

The Virginia Living Museum entered its third decade with a new name, new museum layout and a new purpose as the first living museum east of the Mississippi.  After a $3.2 million building campaign and 10 months of renovation, the museum reopened its doors on May 17, 1987 as Gov. Gerald L.  Baliles cut the ribbon.

“A living museum is a result of a recipe that combines elements of other places that people might already be familiar with – zoological parks, botanical gardens, science museums, natural history centers,” said James R. Rollings III, director of development.

“The old nature and science center was a great place, but it didn’t have the resources to do everything that it tried to do,” Rollings told the Daily Press in a 1994 interview. 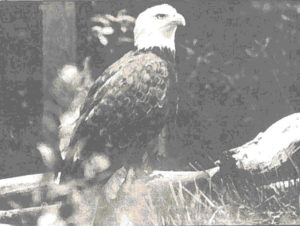 Since its inception, The Virginia Living Museum has acted as a sanctuary for injured animals.[Photo by Ruth Fan]

The museum added hundreds of live animals, including outdoor exhibits of bobcats, red and gray fox, deer, wild turkey, river otters and more, down to the tiniest barnacles, seahorses and spiders. All the animals were contained in natural settings and some were grouped together along with the plants that they would naturally call home. Two bald eagles, which had been injured in the wild, were exhibited in an open-air enclosure.

Inside a 60-foot display of plants and aquariums showed the native life of the James River from its beginnings in the western Virginia mountains to the Atlantic Ocean. Other exhibit areas featured Virginia’s prehistoric life and carryovers into today’s living creatures, living examples of camouflage, animal defense systems and shelters, and a two-story songbird aviary fronting on Deer Park Lake. Volunteers at a Touch Tank and Discover Center encouraged young visitors to touch.

The outdoor exhibit animals were showcased along a wooded trail that meandered along Deer Park Lake.

As part of the transformation, the planetarium underwent a $250,000 renovation, reopening with a new program titled “Lifetide.”

“We spent about $16,000 on the star ball alone,” Astronomy Director Jon Bell told the Daily Press. “And it was money well spent. The old projector did about 2,400 stars. Now we do about 800 more. You are seeing fainter stars—and farther into space.”

This renovation came at the perfect time for Star Trek fans who loved looking into the deep pockets of space. In the spring of 1988, the planetarium hosted “Starquest,” a show that depicted humans’ fascination with space. The program was narrated by Star Trek actor Leonard Nimoy, known as Mr. Spock to Star Trek fans who flocked to see the show.

Meeting the Needs of Local Schools By the mid-1980s, all four Peninsula school systems, Hampton, Newport News, Poquoson and York County, were on contract with the Virginia Living Museum — sending students to receive curriculum-enhancing programs. To support this mission, the Virginia Environmental Endowment awarded the Museum a $28,800 grant to develop a series of educational programs for high school students.

Bringing science to the schools, in the early 1990s the Museum also launched a series of in-school programs designed for kindergarten through fifth graders.

As word about the Museum’s programs spread, they caught the eye of some influential names.

Susannah Simpson Kent, director of the federal Institute of Museum Services, complimented the Virginia Living Museum after observing its education classes in May 1992. The Daily Press quoted Simpson as saying, “Now that I’ve seen your museum, I would be hard pressed to find anything else like it.”

The educational programs were enhanced by the growing number of volunteers that regularly dedicated their time to students and families eager to learn.

By the mid-1980s, the Virginia Living Museum had doubled its membership roster to include nearly 2,000 families and individuals, and had more than 150 dedicated volunteers. Volunteers were, and continue to be, an invaluable resource. The Museum advertised in local newspapers for volunteer positions in areas such as animal care, landscaping, the planetarium and the gift shop.

And these volunteers in the ‘80s and ‘90s cherished their time spent at the Museum, just like volunteers today.

In the Museum’s newsletter Paws and Reflect, volunteers like Ethel Vellenkemp shared their experiences working with students and families. “The philosophy of the Museum is wonderful,” said Ethel in 1992. “The people here have the same goals and interests as I do. There are so many interesting and wonderful things to do here. There’s always something new to learn.”

A Growing Home for Animals During the decade, the Museum continued to add animals. A buck joined the four female white-tail deer.

Crowds gathered with delight in June 1991 to see two otter babies that were born in the winter.

In 1991 the Museum opened an outdoor wetlands aviary, showcasing more than 30 species of beautiful and endangered waterfowl, including herons, egrets and bitterns. The exhibit was also designed to educate the public about the importance of wetlands as a nursery ground for wildlife and home to one-third of all endangered species.

The Museum also welcomed a loggerhead turtle as part of the Head Start program. To help maintain the loggerhead population, this program hatched baby turtles in captivity and raised them until they were big enough to fend for themselves in the wild.

The Virginia Living Museum took to the small screen in 1988, when a film crew from the British Broadcasting Corporation (BBC) used the Museum as a filming site for its “Nature” television series. The crew took advantage of the natural, open feel of the animal habitats, preferring their wilder look than those in zoos.

The Denbigh Gazette highlighted this fact in their coverage on the film crew. “We needed native animals for the production,” Steve Nicholls, BBC assistant producer, told the Gazette. “In many other places where we’ve filmed animals in captivity, we’d have to spend time and money making the enclosures look natural. After scoping out the Living Museum, we found that we’d be able to get the close-up shots we needed without having to alter the animals’ enclosures.”

BBC cameraman Rodger Jackman agreed. “This place is actually quite exceptional because it’s all been set in a natural environment to begin with,” Jackman explained. “It gives that feeling of being in the wild. The public has a great opportunity here to see wildlife up-close.”

Bolstered by its growing attendance numbers, the Virginia Living Museum continued to feature new and unique opportunities for visitors.

To expand its safaris beyond the U.S., the Museum sponsored a nine-day nature expedition to the Galapagos Islands, featuring the expertise of guides from the Charles Darwin Research Station.

In an interview with the Denbigh Gazette, Education Director Peter Money explained the unique opportunities of visiting the Galapagos. “It’s like a living biological laboratory and one does not have to be a hot shot biologist to get a lot out of this trip,” said Money. “It’s like visiting 10 different universes.”

In 1987 the Museum sponsored a special exhibit: “Bats Incredible.” This skin-crawling exhibit displayed photos of Virginia bats to shed some light on these mysterious midnight creatures. Guests could see live bats and bring home their own bat boxes to house wild bats local to the region.

Another huge crowd-drawer for the Museum was its Dinomation Dinosaurs exhibit.

First displayed in 1989, these stomping, growling dinosaurs brought Virginia’s ancient wildlife back from the Jurassic. The exhibit returned in 1991, featuring a new animated baby Stegosaurus and a massive Tyrannosaurus rex.

Moving Forward as a Living Museum

In 1992, leaders and staff celebrated the fifth anniversary of the renamed Virginia Living Museum with the dedication of a butterfly garden, thanks to donations from the Huntington Garden Club. The garden was designed and planted with the help of Museum staff and chief petty officers from Norfolk Naval Base who installed the garden’s stream.

After 30 years in Newport News, the Museum had become a permanent part of the community. To ensure its continued growth, Museum leaders inaugurated its first-ever annual fund drive in 1992. In that first year, community leaders, led by David L. Peebles, chairman of Ferguson Enterprises, set out to raise $105,000.

The fundraising drive has become an annual occurrence, supporting the Museum as it continues to support the community.