There are over 20,000 fish species inhabiting every possible aquatic habitat, so there are some very strange fishes out there. Even in this area, there are many unusual fishes that are relatively abundant, but the average person does not often see. Some of the fishes like the northern stargazer (pictured below) are ambush predators and bury in the sand, so they are deliberately hidden from view. 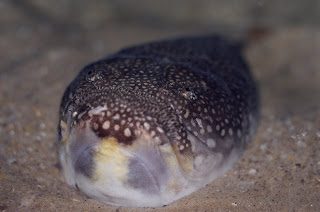 Others, such as searobins, are often associated with structure, deep water, or active primarily at night. There are a few species of sea robins in Virginia, most common are the northern searobin and the striped searobin (pictured below). 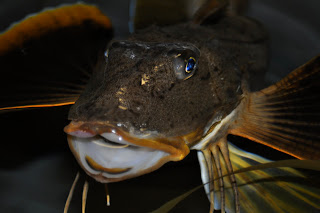 Searobins are occasionally caught on rod and reel while bottom fishing and despite being a good (but small) food fish are nonetheless considered a “trash fish” or nuisance by anglers.

Both these fishes are exceptionally beautiful and have highly modified structures. Stargazers have an electrical organ behind their eye that is thought to be used to stun prey. They also have venom glands at the base of their pectoral fins for defense. Stargazers as so named for the positioning of their eyes that look skyward to locate prey moving overhead as they are entirely buried in sand. Once prey is located, stargazers create enormous suction with their huge mouths and engulf their victims; a move that is almost too fast to see.
Searobins have a large bony head with a duck-like mouth and very specialized pectoral fins. The foremost pectoral fin rays are detached and singular; they can use them like fingers to stir up substrate and locate prey. The remainder of the pectoral fins are very broad and brightly colored (as seen on a northern searobin below). Also they are able to produce sounds through the contraction of muscles surrounding their swim bladder  and – similar to a croaker or oyster toadfish – they are known to croak or grunt loudly when caught. 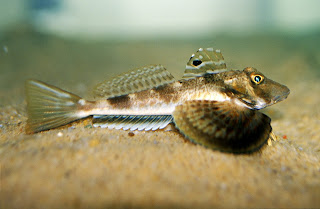