Are Aliens All Wet?

Greetings all!  Yes, I know, I’m a day early.  I decided to post today because I’ve got the day off tomorrow, and I’m spending it with my daughter.  So…let’s take a question.

My friend Pam posted the following:

Kelly, why is water the determining factor in finding life on other planets? Doesn’t that limit our definition of life to a terrestrial, Earthly paradigm? Couldn’t other forms of life exist that require a molecule other than water for survival?

So I thought I’d talk a little bit about this one (hence the title!), as it’s an excellent question (thanks Pam!).  Simply put…yes.  And yes.  It’s entirely possible that some kind of lifeform could exist that doesn’t require water, and in fact, requires some other compound for survival.  So the question becomes…what would that lifeform be like?  How could we test for it?

You see, all of our physical searches for life beyond our planet have involved robots, which think like a computer.  We can tell the robot to test if certain conditions are met, and it can tell us yes or no.  So what conditions do we program it to look for to see if life is present?  Well…the only life we know requires water.  We know that life forms that require water generally do similar things, like respirate, produce certain kinds of waste products, reproduce themselves and things like that.  These give us parameters to test.  Life based around something other than water is so foreign to us, we wouldn’t even know what to begin to test for!  So we make the decision to search for “life as we know it” – that is, water and carbon based.  While this definition limits the kind of lifeforms we are likely to find, it does at least give us a starting point to work from.

So the next question becomes: where can we find water?  Well, water can be found in a whole lot more places than just Earth.  Come visit the museum for our daily 12:30pm planetarium show “Oasis in Space.”  It’s a beautiful and exciting full-dome program that takes you on a journey through our solar system searching for water.  You’ll be surprised at how many places water is hiding right close by!

But let’s face it…any life we find here in our solar system is probably going to be minor – something like bacteria, plants, or maybe fish.  When most people talk about aliens, they mean the “take me to your leader” variety…a sentient being that we can carry on a conversation with.  If such highly developed life were present elsewhere in our solar system, we’d probably already be aware of one another.

So what about life on planets beyond our solar system?  There are some 500-plus confirmed other solar systems out there…and the numbers are only going to get bigger.  NASA’s Kepler mission is in orbit right now, identifying potential planets, with over 1200 now awaiting confirmation.  Some of them are even approximately the same size as Earth.  Does this mean they are inhabited?  We can’t say for sure.  These stars and their attendant planets are hundreds or even thousands of light-years away, and it will be a while before we can figure out if any of these planets have water, let alone support life.  And keep in mind – Kepler is surveying only a tiny portion of the cosmos: 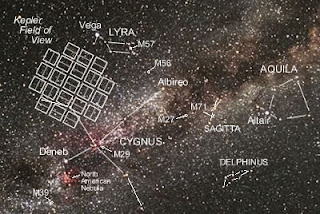 So just imagine how many planets there must be in the entire Milky Way galaxy!  That’s a lot of planets to check out…so if you’re waiting for E.T. to phone home…well…you might want to put the phone on vibrate and go catch a movie in the meanwhile.

Thanks again to Pam for a great question!  And please folks, feel free to post whatever questions you have in the comment section.  I look forward to hearing from you!