Since 1966 the Virginia Living Museum has brought the cute, crawly, creepy and even cretaceous to the Hampton Roads community. Through indoor and outdoor exhibits, traveling exhibits and educational programs, the Museum has spent the past 50 years teaching visitors about the beauty and nature of Virginia.

Now in 2016, the 50th year of the Museum, the community looks back at the last five decades and turns toward the future of one of Virginia’s most unique museums.

From human bodies to hobbit houses, the Museum has offered some unique experiences to visitors in the last ten years. Incorporating science, history and even literature, both traveling exhibits and permanent staples at the Museum encourage patrons to keep coming back to explore. Museum guests climb along the rocky falls in the interactive “Survivor: Jamestown” exhibit. [Photo by the Virginian Pilot]

In 2007, Museum visitors were thrust back in time to experience life in the Virginia tidewater region of 1607. In honor of Jamestown Settlement’s 400th birthday, the Virginia Living Museum offered a unique interactive maze that challenged guests to see if they would survive as a Jamestown colonist.

“Better than a video game, better than reading facts, you enter a three dimensional game where you make decisions and face the luck of fate under the conditions facing the early colonists,” Deputy Director Fred Farris told Port Folio on the Peninsula about the unique exhibit.

To make it through the maze, visitors would have to search for gold, crawl through a log and even zip-line to come through as one of the surviving Jamestown colonists.

The Children’s Garden was designed for young children, particularly preschoolers, to touch, smell, grow and discover.

Pairing horticulture with hobbits, in 2013 the Museum opened the Children’s Garden near the original Museum building. With a nature playground, learning garden and a hobbit playhouse, the Children’s Garden encourages young children to play outdoors and engage in physical activity while enjoying nature.

Museum visitors learned a lot about themselves during the summer of 2013 when the Museum hosted “Bodies Revealed,” giving guests a close look at real human body specimens.

The local medical community supported the exhibit, seeing it as an important educational tool for both medical students and the general public. Riverside Health System, along with Orthopaedic & Spine Center and Tidewater Physical Therapy, helped sponsor the three-month long exhibition. Cadavers on display for “Bodies Revealed” allowed Museum visitors to see the inner workings of both healthy and diseased bodies. [Photo by Joe Fudge/Daily Press]

The Atlanta-based exhibition displays preserved, dissected human bodies in a variety of poses to show how the body functions. Guests could see how joints move bones for riding a bicycle, how muscles tighten to throw a baseball, and even how lungs decay after years of smoking.

“The most important thing is that people learn as much as possible to be better caretakers of the body they live in. People are pretty impressed with how beautiful and complex their bodies are when the skin’s removed,” said Roy Glover, a retired University of Michigan anatomy professor, and medical director for the presenting company, Premier Exhibition Inc. “If we can encourage one person to quit smoking, it will have been worthwhile to be here.” In 2014, the Museum again brought back dinosaurs as a summer attraction. Visitors could examine life-like replicas of some of the largest and smallest land dinosaurs of the Cretaceous period.

“Dinosaurs are an integral part of our mission, marketing and attraction to visitors,” Executive Director Page Hayhurst explained in a Daily Press interview. “Over the past 24 years of dinosaur exhibits, the Museum has built expertise, collections and partnerships to provide our community with a natural history resource like no other, making the (living museum) unique in the marketplace.” 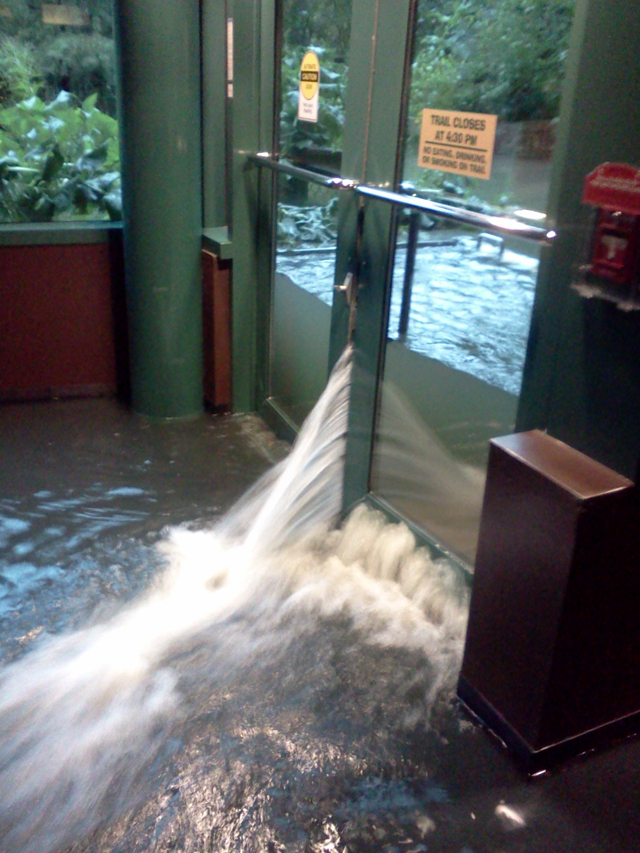 The Museum’s two-foot four-inch floodgates could not withstand the flash flood in August 2012. The flooding caused more than $500,000 in damages to the Museum’s first floor.

Despite some amazing exhibits, a series of setbacks in the last decade have the challenged the Museum both physically and financially.

When the Museum’s construction note was called as part of the nation’s financial crisis in 2008, the community rallied, an anonymous donor pledged $6 million and the community raised $3 million enabling the Museum to pay off the debt by the Dec. 31, 2009 deadline. The Museum celebrated by having its opossums eat a note-shaped cake.

Weather was not on the museum’s side in 2012 when flood waters rushed through the museum’s doors twice in four months. Thankfully no animals were hurt in the flash floods, but the first floor of the main building sustained more than $500,000 in damage during the second floor. Repairs were designed to minimize the effects of future floods.

The new gates from the shipyard, however, are designed to be used by just one person. “That way during flood season, we can incorporate the floodgates into the Museum’s evening closing routine,” said Farris. “The old gates were very heavy panels,” said Fred Farris, the Museum’s deputy director. “Several staff members had to carry each gate over to the door and slide them into a groove in the concrete.”

The Museum continues to seek the support of its community to bolster its endowment for future funding. Annual fundraising events scheduled throughout the year bring community members and Museum patrons together for a common cause.

Two popular events are the Museum’s annual Oyster Roast and Bacchus Wine and Food Festival. Both have been voted “Best of the 757” by readers of Coastal Virginia Magazine. Jason Latham piles on the roasting oysters for the November fundraiser in 2014.

2014’s Oyster Roast in November brought in more than 600 people, a sold-out event that raised more than $43,000. This out-door event offers Museum members and visitors a feast of oysters and other seafood while raising money for the Museum’s education programs and operations.

Another food-themed fundraiser is the Bacchus Wine and Food Festival. Inspired by the Greek god of wine and pleasure, the festival brings the delectable tastings of local restaurants and wineries to Museum guests. 2014 marked the Museum’s 10th festival, hosting more than 650 guests raising their wine glasses to the Museum.

In addition to regular fundraisers, private donations from community members have supported the Museum throughout its life. Glenna Goodacre’s “Bronze Boy,” donated by Harry and Judy Wason, captures the excitement of learning as visitors enter the Museum.

In 2007, an anonymous donor helped fund a $325,000 café. The Wild Side Café now provides visitors with snacks and lunches. In 2010 Harry and Judy Wason donated “Bronze Boy,” sculpted by internationally renowned Glenna Goodacre. Standing in front of the museum, Bronze Boy has become a favorite photo spot for visitors. For the 50th anniversary, the Wasons gifted the museum a sculpture of a Black Bear Family by Eastern Shore artist David Turner.

The Virginia Living Museum celebrates its 50th anniversary in 2016. Throughout these past 50 years the Museum has seen tremendous changes, challenges and support from the local community. Beginning as a little brown building nestled in the Deer Park trees in Newport News, the Museum has expanded to encompass 21 acres of scientific learning, interactions with animals and family fun.

The Museum would not have lasted 50 years without the support from its community, its dedicated volunteers and its passionate employees. Working hand-in-hand with the city of Newport News and citizens of Hampton Roads, the Museum became and continues to act as a hub of learning for visitors of all ages.

Cancel Reply
VLM Through the Years > 2006-2016
Connecting people to nature through educational experiences that promote conservation.