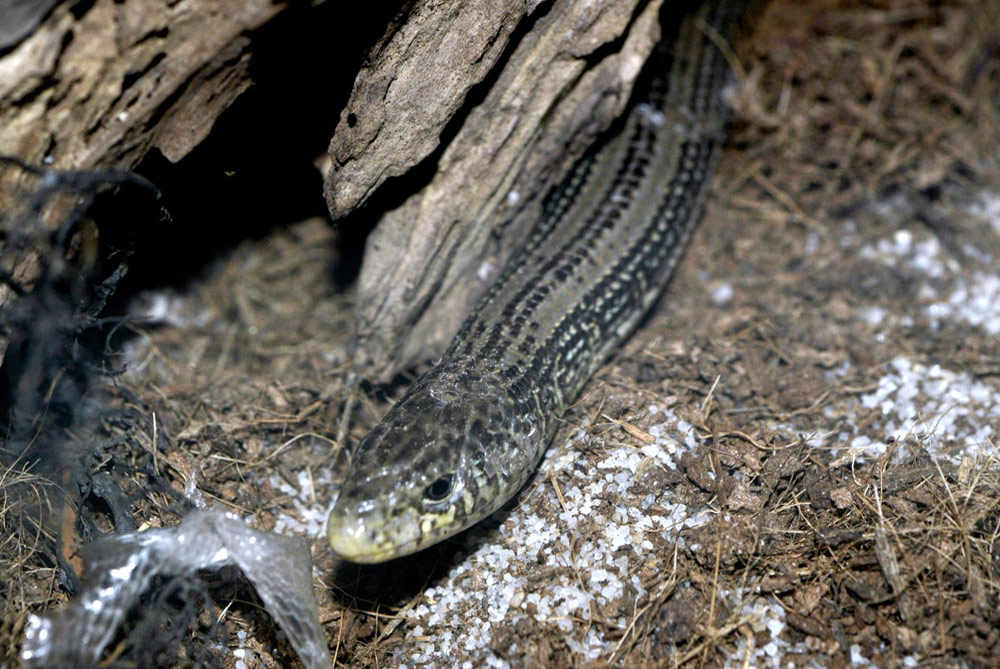 Walking through the museum’s Chesapeake Bay Gallery, you may notice a rather small exhibit located just between our beach and saltwater marsh exhibits; a literal hole-in-the-wall. At first glance, you might believe the exhibit to be empty, save for a few sticks, rocks and a whole lot of sand. Of course, the exhibit isn’t empty! This is our dunes exhibit, and if you are lucky during your visit, you may get the chance to see one of Virginia’s most unusual (and uncommon) reptiles: the Eastern Glass Lizard!

The eastern glass lizard (Ophisaurus ventralis) is fairly unusual because of one particular feature: it completely lacks legs. While a legless lizard could very easily be mistaken for a snake, there are a couple characteristics that set them apart. Glass lizards have eyelids that open and close just like ours, while snakes lack eyelids and have a clear scale that covers the eye, so their eyes are always “open”. Lizards also have an external ear opening behind the eye that snakes completely lack. Of course, these features can be difficult to observe from a distance, but it’s always better to give a wild animal its space (especially when you aren’t completely sure what it is)!

Glass lizards are fossorial, meaning they live most of their lives underground. Their legless form allows them to move through the ground with relative ease. This unfortunately means that our own lizard spends much of its time buried, but it does make an appearance from time to time!

The glass lizard is Virginia’s longest lizard, reaching lengths between 1.5 and 2 feet when fully grown (though a record length of 42.6 inches has been documented…just not in VA!). They feed largely on arthropods: caterpillars, crickets, roaches, beetles and other bugs are on the menu for a hungry glass lizard. Though they may eat the occasional lizard, young rodent or snake, their favorite food is grasshoppers. Our own glass lizard has a taste for crickets and, once in a while, butterworms as a treat!

The glass lizard’s name comes from its defensive behavior. If confronted by a predator, the glass lizard can autotomize their tail…this means that they can literally let their tail break off, almost like they were made of glass. The tail makes up about 66% of the body, and when jettisoned, it will wiggle on its own. A predator will (hopefully) be distracted by the tail, and the lizard can make its escape. It will regrow its tail over the next few months, though the new tail may be shorter when completely grown-still, a far better fate than being eaten!

A Virginia Wildlife Action Plan Rating Tier II species, the glass lizard faces a high risk of extinction in Va, and it requires active conservation. With dwindling populations and a limited distribution, these reptiles are becoming a rare sight in Virginia. Be sure to check out the glass lizard exhibit during your next visit to the Virginia Living Museum; the lizard is an incredibly unique animal that faces an uncertain future in our home state.