You’ve read all those articles about living “green” – maintaining your home in a manner that uses less energy, produces less waste, and is kinder to Mother Earth. Now don’t you wish you could go somewhere that actually shows you, up close and hands-on, how it can be done? 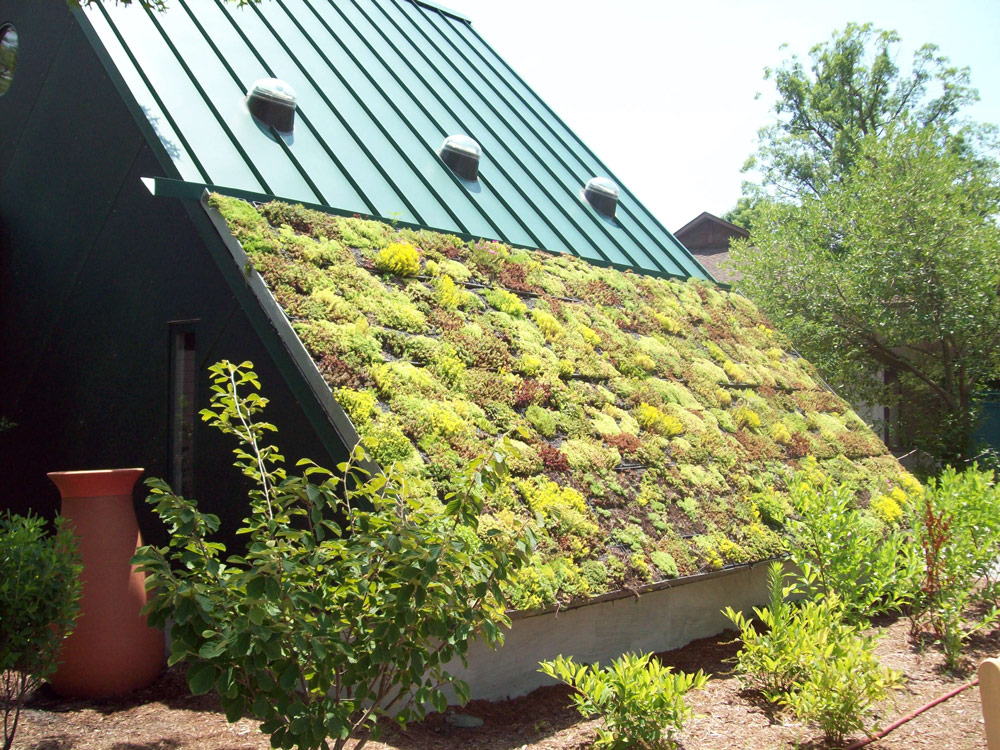 In 2009, the Virginia Living Museum opened the Goodson House, a “Living Green House” environmental education center. In its exhibit house and yard, homeowners, architects and contractors can see all the latest techniques and products they can use to build and maintain an earth-friendly home, presented in a way that makes them visible and understandable to the general public.

The museum’s Green House is the first of its kind in Virginia and one of the first anywhere in the United States. 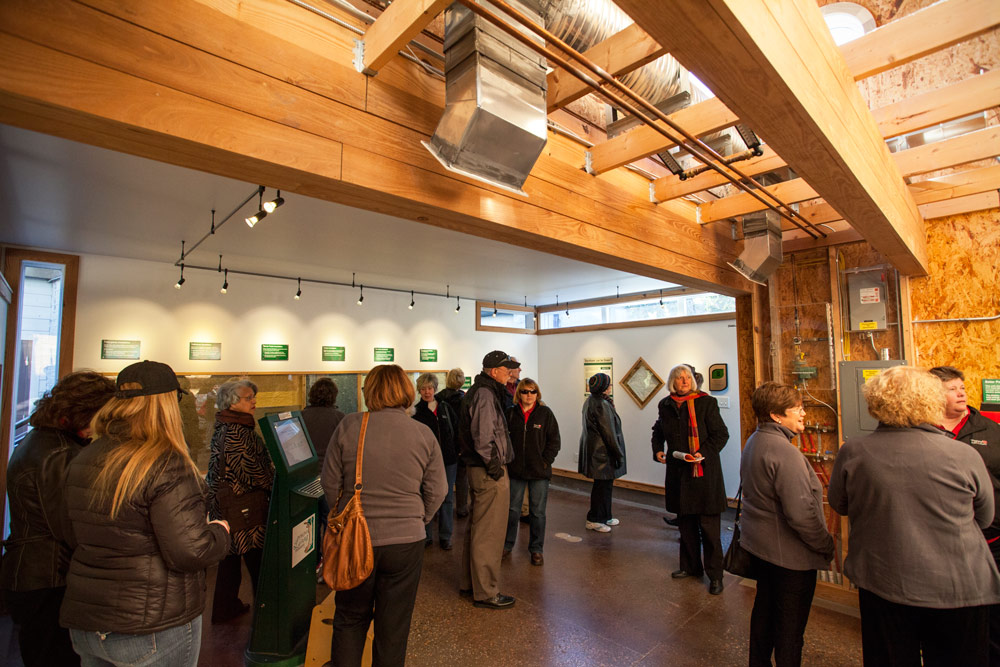 The house is named the Goodson House in honor of the contributions made to the museum by long-time supporter George Goodson, his family and their company, Warwick Plumbing and Heating Corp.

The $315,000 project was partially funded by a $150,000 matching grant from the Chesapeake Bay Gateways Network. The garden portion of the project was also being supported through a donation from the local Huntington Garden Club. In 2013, the Virginia Living Museum installed 165 solar panels on its south facing roof, one of the largest non-profit solar installations in Hampton Roads. The solar system will produce more than 4900 kWh of electricity per month (58,853kWh per year), enough to fully power more than six U.S. homes. The system is expected to save the museum more than $5,000 in electricity costs in the first year alone. The green power produced by the system will prevent more than 41 metric tons of carbon dioxide to be released each year.

Educational signage and a digital screen display of real time solar electrical system production from the panels allow visitors to get a first hand look at how a solar system really works.

The project was funded with a $150,000 grant from Dominion Virginia Power’s charitable foundation. Installation was by Bay Electric Co., Inc., which also contributed to the project.

In its gardens and exhibit plantings, the Virginia Living Museum displays the most extensive collection of native plants in Virginia. Native plants are good choices for area gardeners because such plants tolerate the area’s weather and serve as food and shelter for area wildlife, while also providing a good show in the garden. 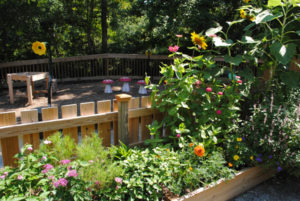 The Children’s Garden is a place for kids, particularly preschoolers, to touch, smell, grow and discover. In the Nature Playground kids can pretend to get trapped in a spider web, hop on mushroom shapes and whisper through talking tubes, and explore a play Hobbit House. The Learning Garden features plants that attract pollinators, birds and butterfly caterpillars; plants that appeal to the senses and vegetables to promote healthy food choices. Kids can use a watering can to give flowers a drink or just sit on a bench and watch for hummingbirds, bees or bugs. The area opened in April 2013 as part of the Native Plant Garden project. The Butterfly Garden features a variety of native plant species that provide food for native butterflies in both their adult and juvenile (caterpillar) forms. It includes plants that flower in spring, summer and fall that produce nectar sipped by adult butterflies. It also includes the particular host plants that our most common butterflies seek out when they are ready to lay their eggs. The leaves of these host plants provide a ready source of food for the caterpillars when they hatch. This outdoor garden attracts numerous wild butterflies.

Learn more about our Butterfly Garden. 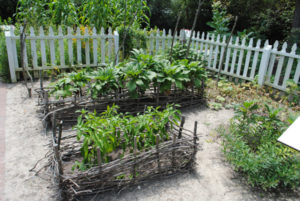 The Virginia Garden highlights 400 years of Virginia’s botanical history. See the native plant species that were present when the first settlers arrived at Jamestown, the flora that was introduced to Virginia colonists by Native Americans and the plants that helped the settlers survive those first critical years. The garden also displays species introduced by the colonists and some native species that were exported to England to be used in gardens there. Learn about an early colonial botanist who was key to identifying and naming Virginia’s flora. Finally, the garden emphasizes some plants that have been introduced to Virginia that have become invasive and threaten native plant populations.

Learn more about our Virginia Garden. The Holt Native Plant Teaching Garden, which opened in April 2013, is designed to represent all of the horticulturally significant plants in Virginia. Starting with 200 to 300 species, the garden will ultimately have about 750 species, along with growing and bloom information. Unlike the Museum’s other gardens that have creative designs, this garden will be a place where visitors can identify plants and learn about their cultivation. The goal is to have a complete horticulture collection of Virginia’s plants from the mountains to the sea. It will grow as the horticulture staff locates and procures interesting plants. The Holt Native Plant Conservatory, named for Museum founders Mary Sherwood Holt and her late husband Quincy, has enabled the Museum to expand its horticultural offerings including propagation of native plants and garden education programs. The Conservatory has more than 830 square feet of plant propagation, greenhouse and horticulture storage space. It is used to grow large plant material for use in animal exhibits, propagate hard-to-find ornamental native trees and shrubs, and to experiment with propagation methods for rare and endangered native plant species. It is open by appointment only.

The Holt Native Plant Conservatory, Holt Native Plant Teaching Garden and Children’s Garden were funded by a grant from the Mary Morton Parsons Foundation and donations by the Abbitt and Holt families, and Green Spring, Huntington and James River Garden Clubs.

The 3,000-square-foot “Conservation Garden” features earth-friendly gardening techniques: the use of native plants, mulching and composting to reduce the use of synthetic fertilizers and pesticides. It shows how proper landscaping methods can reduce storm water runoff that pollutes local waterways, while proving food, water and shelter for wildlife.

Learn more about our Conservation Garden. 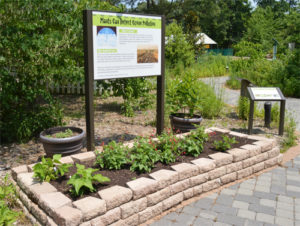 Plants can detect ozone pollution, and the newest garden exhibit located just outside the Wason Education Center demonstrates this problem.

Ozone is a colorless gas found naturally in the earth’s atmosphere. In the upper levels it helps shield us form UVB radiation which can weaken our immune systems , prematurely age skin, and cause skin cancer and cataracts.

Why should we care?

Too much ozone near the Earth’s surface is a pollutant that can harm plants and animals. Ground level ozone is a major element of urban smog, caused primarily by pollutants given off when fossil fuels are burned.

Ozone air pollution can damage our immune systems, irritate lungs and cause breathing difficulties, especially for people who are active outdoors or have respiratory problems like asthma and emphysema.

Look for symptoms of ozone damage in our new exhibit: