The Chesapeake Bay Aquarium represents one of the most dynamic and seasonally diverse estuaries in the world. The Bay serves as the primary nursery grounds for many of the East Coasts most ecologically and commercially important species such as the striped bass, bluefish and red drum, all of which are represented in this 30,000 gallon marine exhibit. The Bay also serves important feeding grounds from late spring through the fall; its rich waters draw a wide variety of species such as the loggerhead sea turtle, cobia, red drum, and sharks which are also on exhibit. Sandbar shark Carcharhinus plumbeus – The sandbar shark is a one of the larger coastal sharks to visit Virginia waters; females may reach 8 feet in length. Although adult sandbars are temporary residents, the Eastern Shore of Virginia is one of the most important breeding grounds for this critical apex predator. Despite their relatively large size, this is a non-aggressive, demersal species, feeding mainly on invertebrates its first several years, switching to a diet of fishes as they age. Lookdown Selene vomer – Lookdowns are named for the unusual profile of their heads which slope sharply downward. Though the adults are mostly silver with yellowish fins like most jacks, young lookdowns have very extensive fin appendages and irregular bands that help disguise them among vegetation. 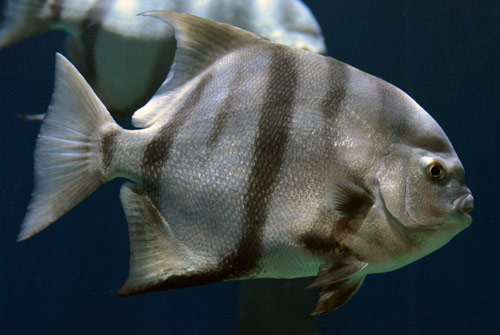 Spadefish Chaetodon faber – Spadefish are extremely popular as both a food fish and for sport. They are found in large schools around structure in summer, where they feed on a variety of invertebrates, including jellies. Black drum Pogonias cromis – Black drum are one of the largest non-sharks species in Virginia, reaching over one hundred pounds. Drum, use their barbels or “chin whiskers” to help them locate food along the bottom, especially mollusks and crab. Bluefish Pomatomus saltatrix – Bluefish are a truly voracious predator, known to gorge on schools of menhaden or anchovies, leaving a slick of chewed fish and oil for the telltale gathering of birds above a feeding frenzy. Many anglers also become aware of their aggressiveness and learn the hard way to avoid their powerful jaws and razor sharp teeth. Crevalle jack Caranx hippos – The crevalle is a common and widely recognized large jack species in sub-tropical waters, but is only a temporary visitor to Virginia and never abundant here. Adults are most common here offshore in summer, but juvenile jacks are more abundant here, found in late summer often along shallow protected beaches. Cobia Rachycentron canadum – Cobia have a dedicated following, due in equal measure to: their excellence as a food fish, their size and power and to their unpredictability and seemingly random appearances through the summer. Cobia fishermen closely guard their spots and techniques adding to their mystique. Gag Mycteroperca microlepis – The gag grouper is a subtropical to tropical species but can be found offshore around wrecks and deep water structure. All groupers and sea basses are highly prized commercially and recreationally as food fish, but their complex ecology and slow growth make their populations difficult to assess and manage. Grey snapper Lutjanus griseus – Grey snapper are very abundant in southern waters but are generally only seen as juveniles in Virginia. Young grey snappers are hardly grey, but actually can be quite colorful; ranging from dark olive to maroon with iridescent blue markings along their jaws. Red drum Sciaenops ocellatus – Red drum are another species with a dedicated following of fishermen and foodies alike. They’re popular with fishermen because they are very powerful, get very large (100 lbs.) and are relatively abundant, but they are also popular as a food fish especially down south where they are most commonly prepared as “blackened redfish”. Large red drum migrate through our coastal beaches in the fall, and yield some of the largest red rum in the world.